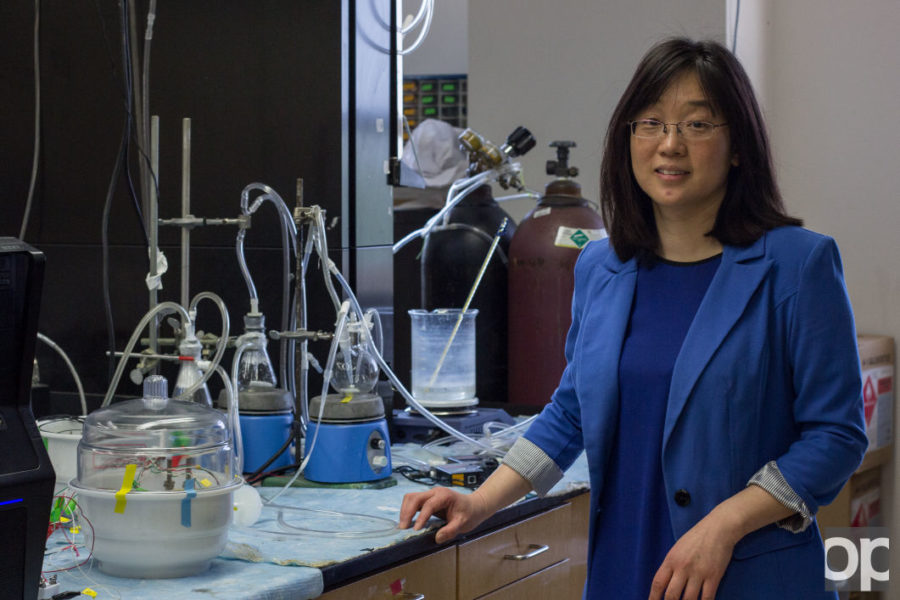 The research that she and her lab are working on may help with a wide variety of situations, from miners navigating treacherous caverns and seeking clean air to asthma patients who can benefit from wearable indicators.

Big things are happening in OU’s Science and Engineering Building. This is where professor of chemistry, Xiangqun Zeng has been working and conducting research on gas sensors.

Zeng explained that the research that she and her lab are working on may help with a wide variety of situations, from miners navigating treacherous caverns and seeking clean air to asthma patients who can benefit from wearable indicators.

Through the research that Zeng and her post-doctoral students are conducting, she tries to foster an environment in which everyone working together is comfortable with one another. She attributes much of this atmosphere to the open dialogue between her students and herself.

“I want them [the students] to see, it’s more than just a job,” Zeng said about the love of chemistry that she instills in those that work in her lab.

The joy found in completing both the intellectual and hands-on work in the lab are what Zeng credits as being the most important part about making progress and creating quality work with their research.

So far, Zeng has taken part in the publishing of 50 papers on her work and her lab currently holds six patents as well.

“A good project can keep growing in many directions,” Zeng said.

Recruiting her post-doctoral workers from universities across the state, Zeng uses another motivating tool to effectively make progress with their research: her work ethic.

According to professor of physics Brad Roth, Zeng will come into the lab on weekends to get the work done that she needs to.

In his nomination of Zeng for the International Service Award this year, Roth wrote, “The reason many come to OU is to work with mentors like Xiangqun.”

He also brings up the fact that Zeng’s role as the coordinator of OU’s health and environmental chemistry PhD program puts her at a very prominent position, both within the campus community as well as the national scientific community.

Zeng herself recognizes the influence that she has on those that she works with. She is of the philosophy that the amount of time that she puts into the lab sets an example of the level of commitment that she desires from everyone else.

Commenting on Zeng’s hard work, David Archbold, director of the International Students and Scholars Office, said, “I think that Professor Zeng is a very well-deserving person and her hours of hard work on her research and helping students to succeed needs to be recognized.”

Zeng has many stories about the various lives that she has positively impacted during the course of her career, but perhaps the most striking is one about a former student from 10 years ago.

She described this student as being arrogant and unable to accept that she, as a woman was more knowledgeable than a man. Zeng said that this idea is woven deeply into a lot of Chinese culture. Having spent much of her early life living in China and receiving two degrees from Chinese universities, she said that she has had to deal with this type of mindset throughout her life.

The story has a much different ending though. Zeng said that this student contacted her recently, thanking her for all that he learned from her. This came as a pleasant surprise to Zeng, given their history of working together.

This story illustrates the profound impact that being at a university such as OU has allowed Zeng to have in changing the lives of others in addition to the contributions that she and her lab made to the field.