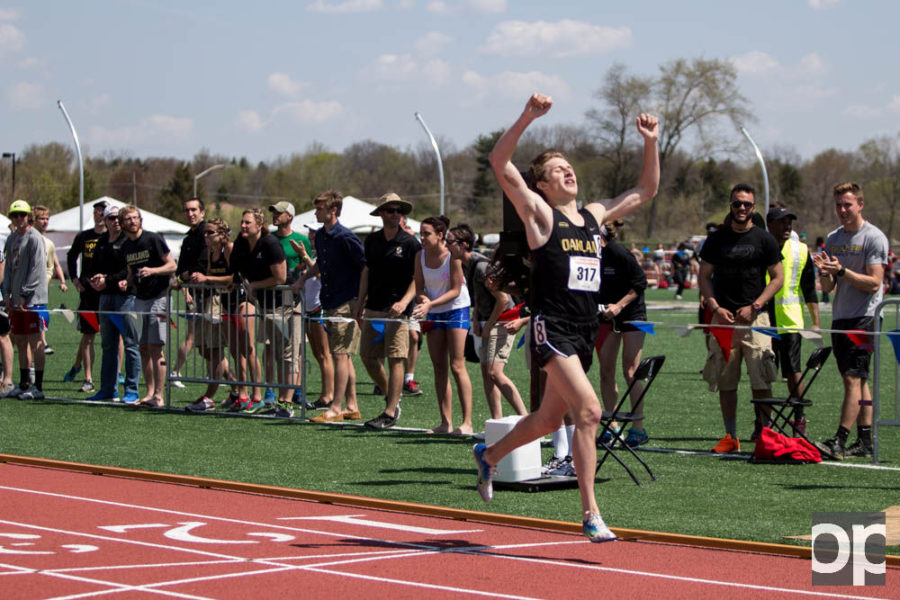 A slew of individual victories on the final day of the Horizon League track and field championship, Sunday, May 3 set Oakland’s men and women’s teams up for two third place finishes.

A slow start to the three-day meet put Oakland in second to last place in both the men and women’s meet entering Sunday but the final day saw records go down for the Golden Grizzlies.

Oakland head coach Paul Rice told Grizz Vision after the meet that the final day of the meet was the day to leave it all out there.

“We have to come to perform and we did today,” Rice said. “We had five individual champions and multiple people on the podium.”

redshirt freshman Bryce Stroede in the 1500m runsophomore Aaron Davis in the 200m dashsenior David Koponen in the 800m runsophomore Ashley Burr in the 5000m runsenior Serena San Cartier in the 100m hurdles.

Junior Miranda Hass claimed an individual title in the 3000 meter steeplechase on Saturday.

On the men’s side, Oakland scored 110 points on the weekend, only finishing behind Milwaukee, with 184 points and Youngstown State with 178.

For the women, Youngstown State was crowned the champion with 156. Milwaukee was the runner up with 148 points. Oakland finished with 101, well ahead of fourth place Detroit with 84.

The surprise of the day was Stroede capturing the 1500m title in 3:49, defeating defending Horizon League champion Tony Sustachek of Milwaukee and runner-up Eric Rupe of Youngstown State.

As soon as he crossed the finish, he walked over to his father and said “I did it, Dad.”

Rice said during the interview that nobody expected Stroede to finish in first.

Koponen wasn’t the only top performer in the 800 for Oakland, his longtime teammate, junior Chris Scott, came in 2nd place in 1:53.81, exactly one hundredth of a second behind Koponen.

The championship also served as the final competition in the first annual Metro Series between Detroit and Oakland, even though the Grizzlies had already clinched the title. Oakland finishes with 26 points to Detroit’s ten.

The track and field team will send several athletes to compete in the NCAA preliminaries in Jacksonville, Florida on May 28 with the chance to earn a spot in the national championship in Eugene on June 10.