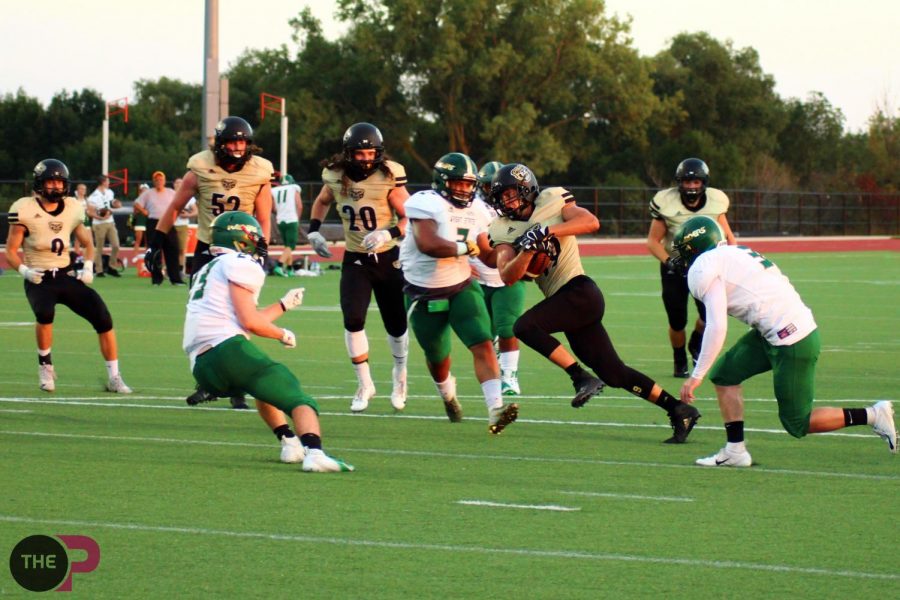 After a 48-14 loss in their season-opener against Lawrence Tech University on Sept. 1, the Golden Grizzlies bounced back with a huge home-opener victory against league opponent, the Wright State University Raiders. Oakland defeated the Raiders 50-6.

Unlike what happened against LTU, the Golden Grizzlies dominated everywhere; offense, defense and special teams. The defense sacked the Wright State quarterback seven times, forced two interceptions and forced a fumble as well. Senior linebacker Bobby Saad led the way with six tackles, one sack and one safety.

“We watched a lot of game film preparing for these guys,” Saad said. “There were times when I knew exactly what plays they were gonna run based on their formations.”

Junior quarterback Ben Hajciar led the way offensively, completing 10-19 of his passes for 115 yards and two touchdown passes. Hajciar, who was one of the few players able to be productive in the game against LTU, gives credit to his success to his teammates.

“The last two years, I’ve been so used to coach Featherstone’s offensive play calling and now with a new coach and a new playbook, we had to learn the new schemes,” Hajciar said. “During the off-season, the receivers and I would get together and work on our routes and play calling, and get our chemistry going.”

Through the first two games, Hajciar has completed 58 percent of his passes, passed for over 200 yards and has thrown four touchdowns passes. Junior running back Chris Ross also had an impact on the game as well, with six carries for 78 yards and one touchdown.

“Lawrence Tech was a wake up call for us,” Saad said. “We never experienced a loss like that before…heck we barely lose games period. So the last two weeks, we were determined to get that bad taste out of our mouths.”

Saad said the biggest thing the team needed to work on was conditioning. Throughout the game against the Raiders, the Golden Grizzlies looked far more conditioned than their opponent.

“When you only have 28 players on the team, it’s hard to keep guys rested throughout the game, especially when we have guys going both ways, like myself,” Saad said. “So conditioning was a big focus for us the last two weeks at practice.”

Head Coach Rick Fracassa faced heavy criticism from fans and experts after the loss to LTU, but he redeemed himself after defeating Wright State.

“I feel great,” Fracassa said. “You gotta respect what these guys did during the game. These guys they love the game, they pay to play and after what we went through against Lawrence Tech, they came out and they balled out. I couldn’t be prouder of how these guys bounced back.”

Fracassa later told the team to enjoy the win for 24 hours and then focus on their league rival, Michigan State.

“From what Bobby (Saad) told him, MSU is one of the four teams that has beaten this team since they started the program in 2013, so they are coming into this game pretty confident that they can beat us,” Fracassa said. “We are going to have film on Tuesday and going to get practice in and prepare for the Spartans.”

The Golden Grizzlies will host the Spartans at home on Saturday, Sept. 22 at 5:00 p.m. ET.