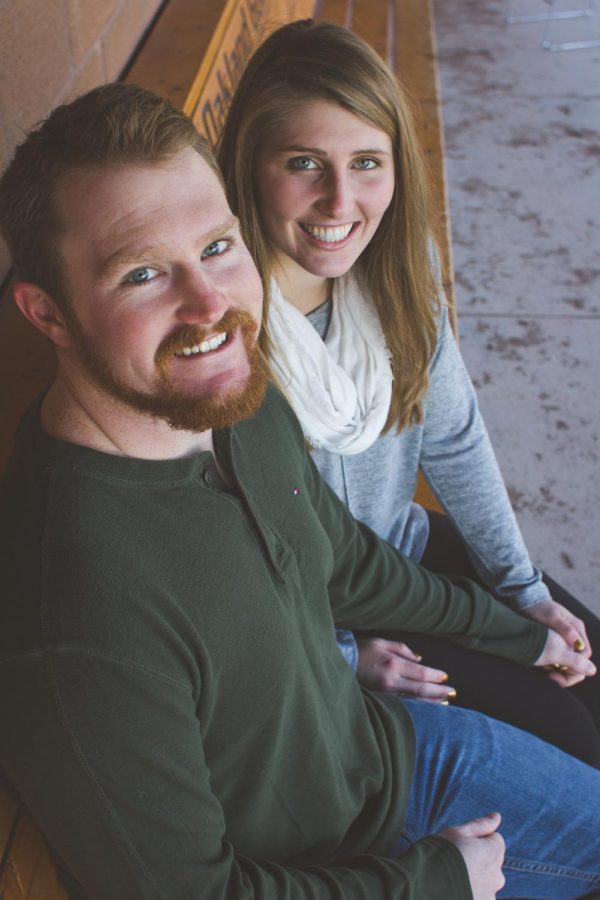 Hundreds of student-athletes make their presence known each season in the 10 athletic programs Oakland University has to offer. While many athletes are native to Michigan, some come from across the country.

Chris and Taylor VanDyke are examples of Oakland drawing in out-of-state talent. Chris VanDyke came to Oakland from Denver, Colo. for the baseball program. As an Illinois resident, Taylor, whose maiden name is Humm, found her place in the volleyball program.

As he grew up, baseball was what Chris was good at. He played in school and for clubs, and he decided on Oakland for his collegiate career with the chance at scholarships and the hopes of getting drafted.

Chris was on the roster for Oakland from 2012 until 2016. Due to injuries, he was allowed to redshirt adding a fifth season. In his career, Chris played in 40 games and started half of them. As a pitcher, he had a 7-9 record with his best ERA coming in the 2016 season with two wins in his 15 appearances. Overall, Chris allowed just four homeruns in his collegiate career.

“It was more than just a sport in college,” Chris said. “It was a lifestyle, it was a brotherhood, it was a lifetime experience.”

Although he endured two surgeries from baseball, Chris described his experience with Oakland baseball as phenomenal and said that he will never regret or forget taking his sport to the next level. In 2016, Chris graduated with a double major in accounting along with production and operations management.

“OU prepared me very well in terms of getting me out there into the real world,” Chris said.

Taylor started getting serious about her sport a little later than many aspiring college athletes. She started playing on a club team after her high school coached pushed her to try out for one of the top club teams in her area. Through club play, Taylor was recruited by Oakland.

“I didn’t know anything about Oakland University,” Taylor said. “I called it a diamond in the rough.”

In fall 2011, Taylor began her first season with Oakland volleyball. She played a minimum of 74 sets every season and ended her career with over 400 sets played.

Taylor has earned academic and league honors in addition to ranking third in program Division I history in career digs and ranking fourth-best in team history for her 545 digs in 2014. She also became Oakland’s first-ever American Volleyball Coaches Association honoree in 2014, earning All-North Region honorable mention.

“To have a positive environment like [Oakland] was outstanding,” Taylor said.

In 2015, Taylor graduated with a Bachelor of Science in industrial and systems engineering. She then went on to get a Master of Business Administration.

“My biggest post-OU achievement has been marrying my college sweetheart,” Taylor said. “Here he is from Colorado, here I am from Illinois.”

The pair met their freshman year during a rainstorm. The meeting wasn’t like a movie, but instead the casual trip to the dinning hall students make every day.

As Taylor was walking back to Hamlin Hall, Chris spotted Taylor’s umbrella and saw an opportunity to not get soaked.

“I don’t know why, but Chris said ‘Hey, can I borrow your umbrella?’” Taylor said.

Without even thinking about it, she gave the then-stranger her umbrella. Eventually, Taylor got it back, and the two began their relationship thanks to that umbrella.

Despite being “polar opposites,” the couple dated throughout college and got engaged in June 2015. Taylor had just graduated, worked a full-time job and started graduate school, while Chris had his redshirt senior season left. In the midst of their hectic schedules, the pair got married July 31, 2016.

“He stood by me while I did my MBA after undergrad and while I was working,” Taylor said. “We probably saw each other two nights a week for an hour. We got married in the midst of all the chaos, and he’s been by my side every single day.”

The two both work at Fiat Chrysler Automobiles now but at different plants. Chris is a manufacturing operations specialist while Taylor works as a digital manufacturing engineer.

With the responsibilities of post-graduation life coming up on them, the former student-athletes had to give up their sports. The couple does their best to keep in contact with old teammates and coaches, and they still try to squeeze in a pickup game from time to time.

“Competing at OU has impacted my life in probably every way possible,” Chris said. “It essentially got me the job that I have right now. It allowed me to meet my wife. It helped me meet some of my lifelong friends.”

The VanDykes will celebrate their second anniversary this July.