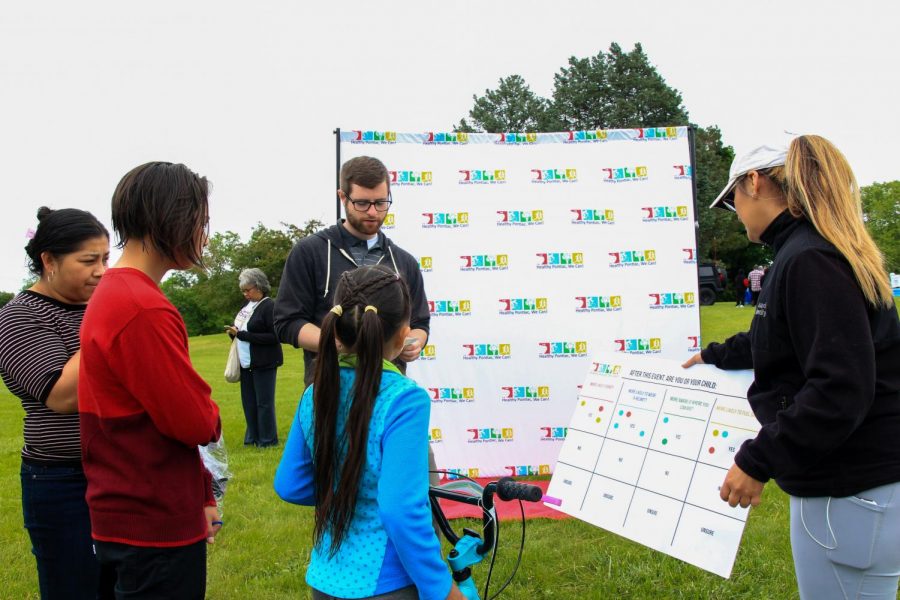 On an unusually chilly Saturday morning in June, members of the Pontiac community came together for the grand opening of Pontiac’s new adult fitness station or, FitPark, at Beaudette Park. Oakland County Health Division’s Healthy Pontiac, We Can! (HPWC) coalition hosted the Pontiac Fit Fest on Saturday, June 2. This is the second FitPark to be placed in Pontiac. The first is at Oakland Park on Glenwood Avenue.

“It’s a big overall goal,” he said. “Number one is we want to try to lower the obesity rates. Number two is we want to try [to] implement fitness with the children because more and more children are becoming prediabetic. That’s the big goal, but other than that it’s about letting kids know that it’s OK to get outside the house and use your limbs. Don’t just use your fingers.”

At the event, HPWC gave away 150 bikes to adults and children who live in Pontiac. After receiving their bikes, the recipients were given a bike safety demonstration, and a free lock and helmet.

“This is such a wonderful event for the community,” Pontiac resident LaShonda Green said. “I remember growing up and seeing people, adults and children, outside being active, but now you don’t see that anymore. This event was definitely needed and hopefully can help bring more life back to Pontiac.”

The FitPark at Beaudette Park was made possible in part by the Centers for Disease Control and Prevention’s Racial and Ethnic Approaches to Community Health (REACH) grant. According to the CDC’s website, the purpose of the grant is to reduce health imbalances among racial and ethnic minorities such has African-Americans, Hispanics/Latinos, Asian Americans, Pacific Islanders, American Indians and Alaska Natives.

The grant was awarded to Oakland University on behalf of HPWC and aims to reduce chronic disease and make healthy living easier for members of under served populations. According to Elizabeth Pare, special lecturer of sociology at OU and monitoring and communications manager for the School of Health Sciences, the City of Pontiac is predominantly African American, there is a larger than average Hispanic/Latino population at 16 percent and the minority is the Caucasian population.

“We always say nutrition was made to make the table more inclusive, but really it’s to transform the table so that everybody is seated at it,” Pare said.

For many members of HPWC, the new FitPark doesn’t just mean that the community will be more active, it also means that Pontiac residents can feel comfortable within the city.

“I think parks are one of the things within a community that makes it a place that people want to live, where they can play just down the street from their house,” said Jennifer Lucarelli, associate professor of interdisciplinary health sciences at OU and chairperson for the Healty Pontiac, We Can! coalition. “The improvements that we have made with the installation of the adult fitness park means that now adults have a place where they can workout right beside their children and everybody can be active at the same time.”