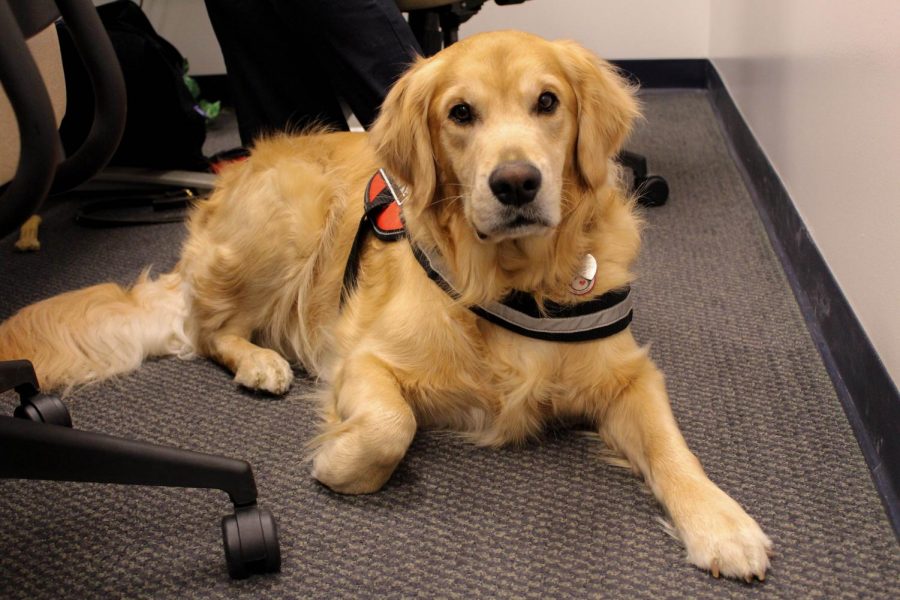 Despite the fact that occurrences of animal assisted therapy have been taking place since the 1700s, there have not been many large-scale research studies to assess its effectiveness.

“Animal assisted interventions is the overarching umbrella of people who do human/animal interactions in general,” said Amy Johnson, director of the Online Animal Assisted Therapy Certificate Program at Oakland University. “If you’re doing therapy, you have a person who is trained in a specific profession who operates within their scope of practice, but they’re working with an animal with intentionality.”

In the 1700s, psychiatric hospitals would use birds and small animals to interact with the patients, which allowed them to focus on nurturing and empathy so that they required less medication and were less violent.

In the 1860s, Florence Nightingale utilized an owl named Athena for a similar technique with those suffering from chronic illness.

In the 1960s, Doctor Boris Levinson became the father of animal assisted interventions. Sigmund Freud even used a Chow named Jofi to get a better temperature from his patients.

“I think we live in a very individualistic culture and we tend to not want to reach out for help and show any vulnerability, and sometimes a friendly, fuzzy, warm dog can be a safe place to do that,” said Angela Moe, professor in Sociology at Western Michigan University. “We might not trust another human but maybe we’ll trust a dog.”

While dogs are the number one therapy animal and horses are number two, others include pocket pets such as rabbits and guinea pigs. Johnson reported one practitioner is even training a therapy snake.

Utilizing these animals in therapy can come in many different forms.

Mental health providers might work with animals, such as a dog, to allow the client to share feelings that he or she wouldn’t want to admit or even realize about his or herself. Johnson once worked with a 9-year-old girl who was able to speak about herself through suggestions of how to prevent a dog from getting anxious.

In occupational therapy, a client can brush a dog rather than making the same motions on a machine, which makes the person more motivated to participate. This causes cortisol levels to go down so the ability to heal is quicker.

At risk youth is an especially popular area for animal assisted therapists, according to Johnson who worked with detention kids.

She would bring in rescue dogs who the children could relate too, and it would cause them to feel safer.

“One of the kids, he was always like ‘I’m fine, I’m good, I can handle this,’ but when he first started working with this dog, he kept saying things like ‘I wonder how he does at night, do you think he’s scared, do you think he doesn’t like having the lights off?’” Johnson said. “Which said to me, okay he’s not feeling safe and comfortable at night.”

Therapy animals can even be used in speech therapy where one might practice sounds to an animal who won’t judge, such as ‘s’ sounds using sit and stay.

Moe stated animal assisted therapy is a resource that could be utilized far more.

“My feeling is, if there’s something we can do to help people feel better and healthier, why not do it?” she said.

On February 1-2, 2019, experts Patricia McConnell and Melissa Winkle will be speaking on animal assisted interventions at OU.