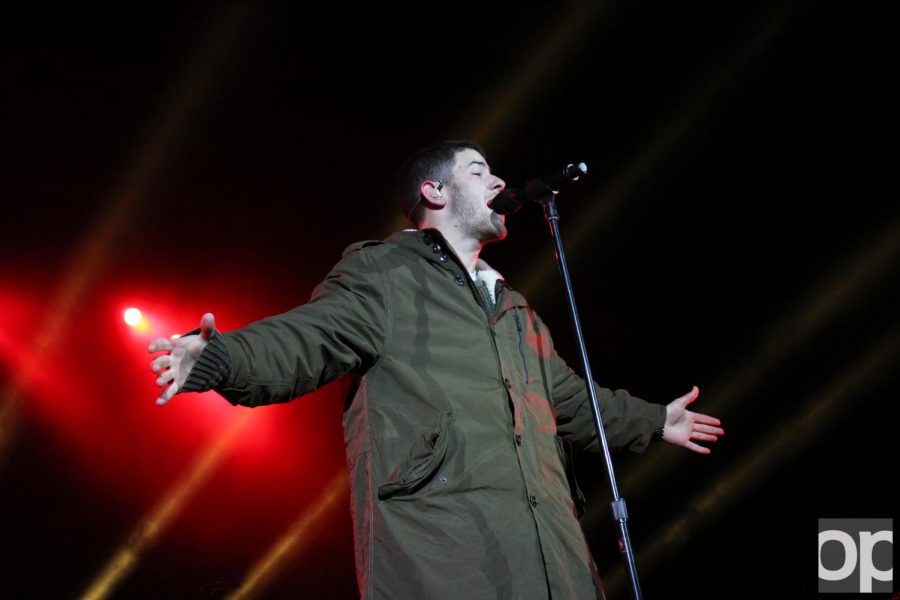 It was the day Oakland University students had been waiting for over two years. After the Student Program Board announced that it would be bringing back it’s annual spring concert, the org made an announcement on March 8 that the headliner would be former Jonas Brothers member, Nick Jonas.  Jonas performed at the Meadow Brook Amphitheatre Saturday, April 14.

Even though it was 31 degrees outside with freezing rain, the Meadow Brook Amphitheatre quickly filled up in anticipation of the performance. Before Jonas’s performance, two other acts went on before him, Oakland-based band Blue Spectrum and Atlanta-based rapper UnoTheActivist.

Blue Spectrum won the opening slot after being named the winner at this year’s Battle of the Bands. The group is composed of Oakland student Kevin Taegel, Antonio Monteleone, Noah Anderson, Mitch Waske, Tanner Allen and Omar Wajeeh.

“It’s really surreal,” Wajeeh said about opening for Jonas. “I can only speak for myself, but I remember when I was a kid watching Disney Channel and the Jonas Brothers were playing there. Now we’re older and we’re playing for the same guy we used to watch on TV. It’s definitely something I don’t think any of us would have expected.”

Blue Spectrum and UnoTheActivist each performed for 30 minutes before Jonas set foot on stage at 9 p.m.

Jonas started his performance with his hit song featuring Tove Lo “Close”. Afterwards he performed more songs off of his most recent album “Last Year Was Complicated” including “Chains” and “Champagne Problems”. Jonas even threw in some classic Jonas Brothers music “Love Bug” and their hit single “Burnin’ Up”. To finish the night off, Jonas ended with his double-platinum and No. 1 U.S. hit “Jealous” as an encore.