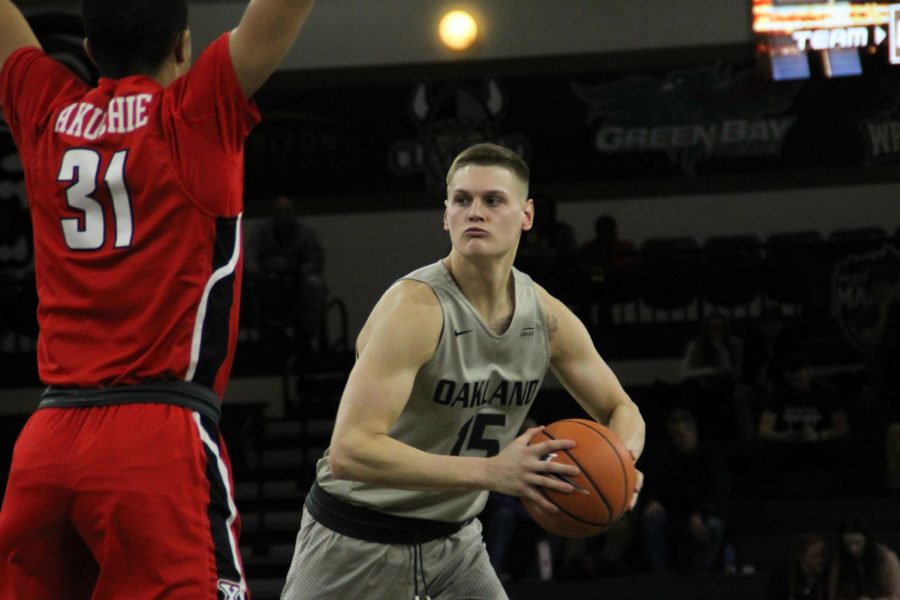 Sophomore forward Chris Palombizio will not return to the Golden Grizzly men’s basketball team next season. Palombizio announced on Thursday, April 5 that he will be transferring from Oakland after spending two and a half years as a Golden Grizzly.

Palombizio announced his intent to transfer in an Instagram post on Thursday night, saying, “I want to thank Grizzly nation for allowing me to call Oakland home for two and a half years. I will be transferring from Oakland and exploring other options to further my academic and athletic career. I’d like to thank my coaches, teammates and everyone associated with the University that has contributed to my overall experience. While it is unfortunate I will not graduate a Golden Grizzly, I am excited about the future and ready to grind this offseason.”

Palombizio was one of two Oakland players to play in every game in the 2017-2018 season, Nick Daniels being the other. He averaged 12.1 minutes per game in his redshirt sophomore season, 4.2 more minutes per game than his first season with the team.

The 6’6″ forward from Chesterton, Indiana averaged 2.7 points per game and 1.9 rebounds per game, and had his best offensive output against Cleveland State on Feb. 26, scoring a career-high 10 points and hitting two 3-pointers. Palombizio performed in crunch time at Little Caesars Arena, pulling down an offensive rebound with the game tied, and hitting a free throw to take the lead with a minute left.

“Chris is a great kid and a great student as well,” men’s basketball Head Coach Greg Kampe said. “During his time here he represented Oakland well, I’m very sorry to see him go. It’s been an ongoing conversation between us. I don’t want him to go, I was not sure what his role will be on next year’s team — we’re still recruiting and figuring out the lineup. No one on our team is a guaranteed starter on opening night right now. I think he’s looking for something better.”

Palombizio was also one of the men’s basketball team’s best students. In fall 2016 and the subsequent spring semester in 2017, the human resource development major was named to the Horizon League Academic Honor Roll. He has yet to say where he is transferring and whether or not he will continue his collegiate basketball career.