Neal Ruhl: The Voice of the Golden Grizzlies 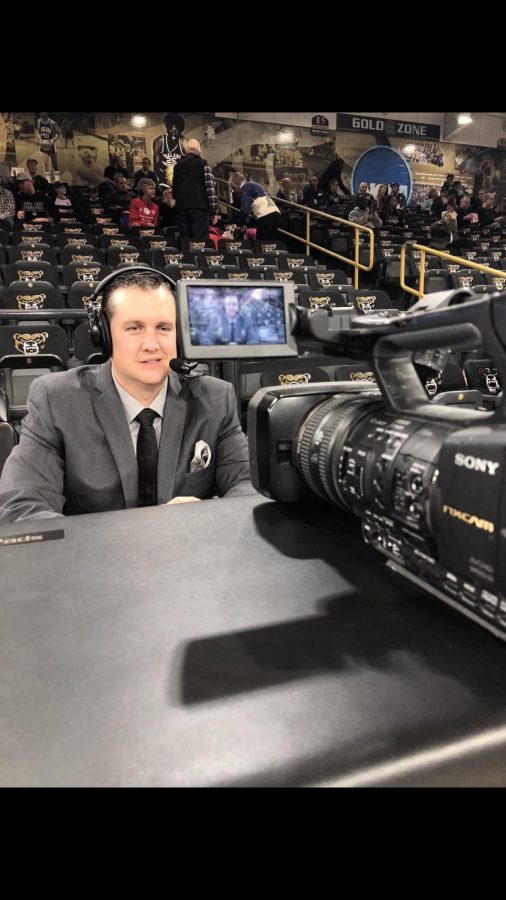 “Daniels passes it up top to Nunn, he puts up a three! Of courrssee Kendrick Nunn for three!!” “Oh Isaiah Brock sent that one back like an undercooked steak!!”

We have heard these classic lines by Neal Ruhl over and over again, and it remains to be music to our ears. Ruhl has been the official voice of the Golden Grizzlies since 2012 but has been at Oakland calling games dating back to his college days. Before he even knew this was the career path he wanted to follow, Ruhl used to call make-believe basketball, football and even bowling games in his backyard as a child.

After graduating from Fraser High School, Ruhl attended Saginaw Valley State University for his freshman year before transfering over to Macomb Community College and then ultimately Oakland University. He began working for WXOU and did the play-by-play broadcasts for the men’s basketball games. He also started writing for the Detroit Free Press and various other media outlets across the country.

“Honolulu Advertiser to The Washington Post, anybody that had a check, I would write them a story of anything that was going on,” Ruhl said.

Ruhl knows that there’s no stop when it comes to this business. He knows that the only way to get where you need to go is to keep grinding. Even having a comfortable job at his alma mater, Ruhl continues to put in the hard work every day.

“This is going to sound corny and cliche, but every day that I do this and every day I wake up tired, I do it for a reason,” he said. “I call a hundred games a year, I don’t do another job, this is my living. I feel like I’m in the middle, I’m not big baller brand or anything like that, but I’m doing well for myself. I always share it with the younger guys, when you get out in this game you’re getting behind me and you ain’t getting in front of me.”

Over the years, Ruhl has made countless memories.

“One of the biggest moments I’ll ever remember is the NCAA tournament game I did,” he said. “I’ll never forget that bus ride, police escort, they closed the roads for ya, you’re in the NCAA tournament, March Madness is as big as it gets at this level.”

Ruhl attributes much of his success to his time here at Oakland and he loves the work that he does as the voice of the Golden Grizzlies.

“I love Oakland, and I love being here,” he said. “I’m in a good spot because the worst thing that can happen to me is I’m at Oakland for the rest of my life, and that’s pretty cool.”

No matter where Ruhl ends up, Oakland will always be home for him.

“Even if the Pistons call me tomorrow, I’m always going to watch Oakland games, and I’ll come to games when I’m in town,” he said. “It’s my wife’s alma mater, it’s my alma mater. My kids are ten, eight and two, and they tell me all the time they want to go to Oakland.”