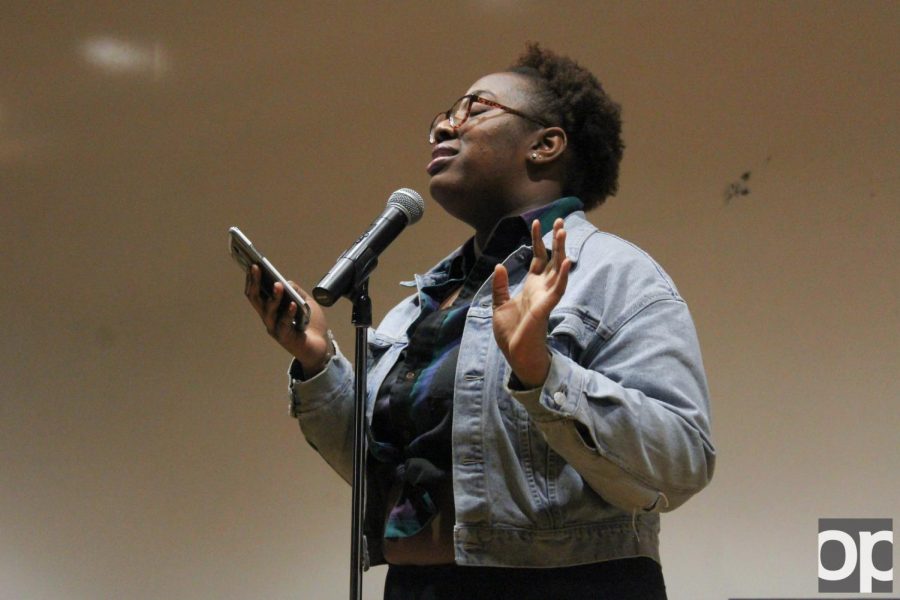 Featuring poetry about and in support of the LGBTQIA+ community, the second Slam for Solidarity took place on Friday, March 23 as part of Pride Month.

The Gay Straight Alliance (GSA) hosted the event with the support of members of the OU Feminists. The event was free for all Oakland University students as well as families and friends.

The program consisted of nine student performers who read two poems each, as well as having an open-mic portion. Audience members were invited to share spoken word poetry that resonated with them emotionally. Performers were also allowed to read poems by other writers that they felt would help them express themselves.

Poetry slams provide people with a platform to share their thoughts and feelings to an audience. Although these slams are normally competitive, the Slam for Solidarity did not have a winner, simply acting as an open forum.

GSA Secretary Dean Nasreddine came up with the idea for Slam for Solidarity last year.

“I felt like marginalized students deserved a platform where they could express their frustrations, joys and overall thoughts creatively,” he said. “I thought it was especially important considering the outcome of the 2016 presidential election.”

As a part of Pride Month, LGBT students were encouraged to part take in the slam even if they didn’t have experience with poetry.

“Prior to the event we held a poetry workshop,” said GSA Vice President Morgan Shaw-Andrade. “We gave out prompts to get people’s creativity going. Sometimes it’s hard to put what we’re trying to express into words so I think the workshop was really helpful.”

OU students read poems on a variety of topics. Destinee Rule read a poem she wrote called “Sensodyne” about abusive relationships. Another student performed “To My Internalized Homophobia.” Other topics included racism, discrimination and body dysmorphia. No topic was off limits, allowing poets to speak on whatever was on their mind.

At poetry slams, audience members are encouraged to make noise when they hear a line that resonates with them. This was also encouraged at Slam for Solidarity.

“Writing poetry and reading it to an audience can provide catharsis in times of stress,” Nasreddine said prior to the event. I think that’s the goal, really. My hope is that, if anything, people will feel a sense of community in that room on Friday, a reminder that whatever they have felt or experienced is echoed in someone else.”

After the success of this year’s Slam for Solidarity, Nasreddine hopes to continue the tradition next year.

Students who are still interested in getting involved with Pride Month, which continues through April 12, can find a list of the remaining events on the Gender and Sexuality Center website.