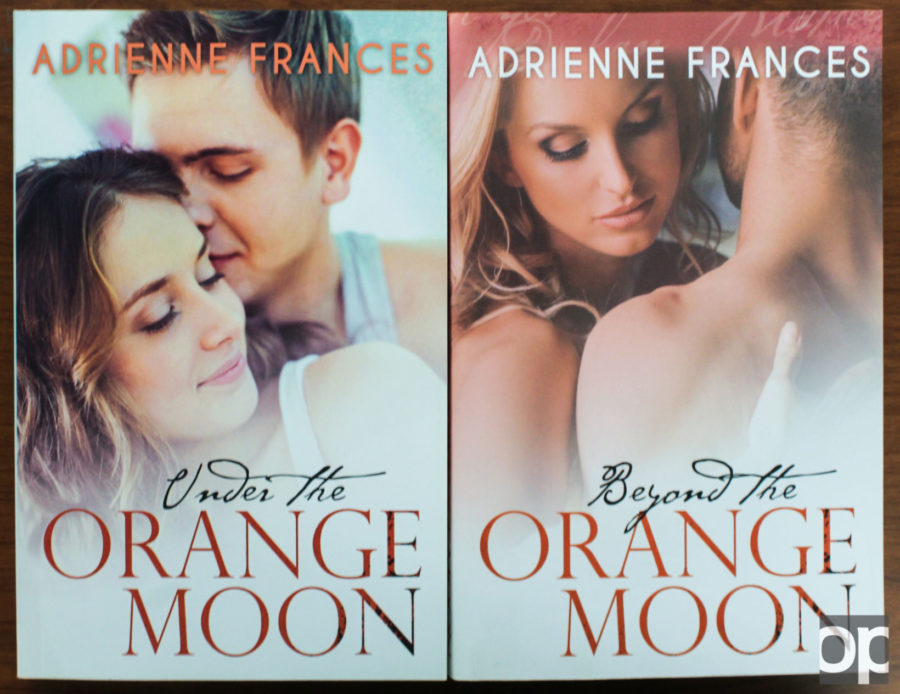 Adrienne Frances has a total of six books planned for the Under the Orange Moon series.

The first book in the series is Under the Orange Moon, which follows Ben McKenna, a boy who has struggled with a difficult past, and Dylan Mathews, a bright and artistic girl who is suffocated by her four older brothers. The book highlights their relationship and what happens after Ben returns home after leaving Dylan for five years.

The second book, Beyond the Orange Moon, follows Charlie Mathews, who has suffered a terrible hardship, and Lucy Dalton, who has witnessed that hardship first hand. This novel shows their relationship build from the bottom up, and how easily it can come crashing down once a huge secret is revealed.

Never fear! Both stories end happily, as most romance novels do. However, don’t let that safety net fool you. You will become so absorbed in the story that you will forget that there is a light at the end of the long, angst filled tunnel.

I don’t want to spoil too much about what happens in either, so I will instead focus my review on Frances’ writing ability.

To put it simply, she has a ton of it.

Her writing is solid. She understands plot structure and pacing, how to write clearly and vividly, and can masterfully create the most heartwarming and gut wrenching scenes. Grab your tissues and prepare for a rollercoaster of emotions.

But what good is an interesting plot without realistic characters to drive the story forward? Frances’ characters are unique and so well written, I can guarantee that you will feel passionate towards all of her characters, whether you love them or hate them. One character a lot of readers love to hate is Ben. He’s not an easy person to like, as the book clearly shows as Dylan struggles to decide how she feels about him. He has a very tragic past and isn’t the nicest person, however he does slowly redeem himself. This makes him one of the most interesting characters in the series so far, in my opinion.

In addition to creating believable characters, Frances is able to skillfully build tension and chemistry between characters – and she doesn’t hold back either. The chemistry between Dylan and Ben sizzles and crackles, while Charlie and Lucy’s chemistry is very natural but somewhat forbidden. Both will tug at your heart strings for very different reasons.

There was only one problem I had with the books, and it’s not at all a criticism of Frances’ writing or story. There are just a lot of characters in the book, and it can get confusing. It took me a long time to remember who’s who in the Mathew’s clan (From oldest to youngest: Hugh, Charlie, Brandon, Jonah/Dylan; you’re welcome.) Then of course, there’s Ben, Olerson, Lucy, Ruth, Linda… You will figure it all out in time, but don’t be surprised if you’re a little frustrated.

Other than that one critique, I honestly think these are some of the strongest romance novels I’ve read. Frances doesn’t write about perfect relationships. She writes about realistic relationships, and that is something to be celebrated.