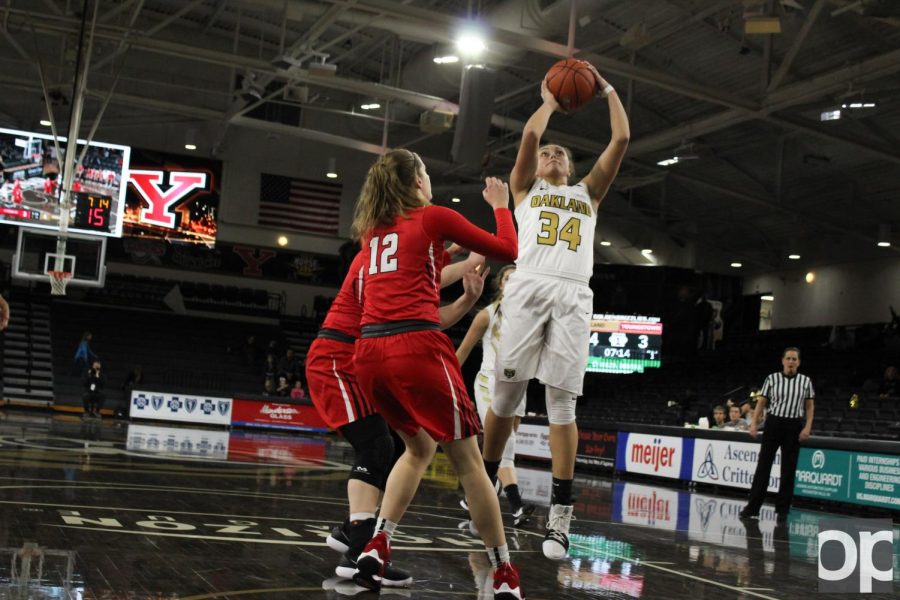 Coming off of a 83-50 win over their biggest rivals, Detroit Mercy, the women’s Golden Grizzly basketball team looked to keep that hot streak rolling Thursday night, Feb 1, over Youngstown State. Oakland came into this one with a 11-9 record, meanwhile Youngstown State was sitting at 8-13.

Leah Somerfield started out the game with a bucket. Oakland came out tough but Youngstown State was just more physical down low and wasn’t missing the post. The score at the end of the first was 21-11 in favor of Youngstown State. Gleason and Bond both had three points and Guingrich and Telesford had two.

The start of the second looked a lot like the first, but the Golden Grizzlies started to weasel their way back into it with five minutes to go before the half. Just as quick as they came back, the Youngstown State Penguins widened the gap to 13 with just three minutes to go. As the half wound down, Youngstown State was on top 43-29. It was a rough first half for Oakland and they looked to turn that around in the second half.

The Penguins started off the second half as hot as they were in the first and there wasn’t much the Black and Gold could do to slow them down. By the end of the third the score was 64-51 still in favor of Youngstown State. Somerfield really started to pour it on for Oakland with 15 points to this point. The deficit was still 13, but the momentum shift inside the O’rena was not hard to feel.

Sha’keya Graves started off the final quarter with a smooth basket in and Oakland continued to close the gap. There was plenty of controversial calls and almost all of them were against Oakland. Then all of a sudden Taylor Jones hit a clutch three with a hand in her face and the Black and Gold were only down by eight. The Black and Gold gave it their all and were within four points at one point, but the comeback was to no avail. Oakland fell 86-76 to the Youngstown State Penguins.

“Well, we didn’t make plays when we needed to and we didn’t play well down the stretch” Tungate said. “You’re not going to win when you give up 86 points in your own gym.”