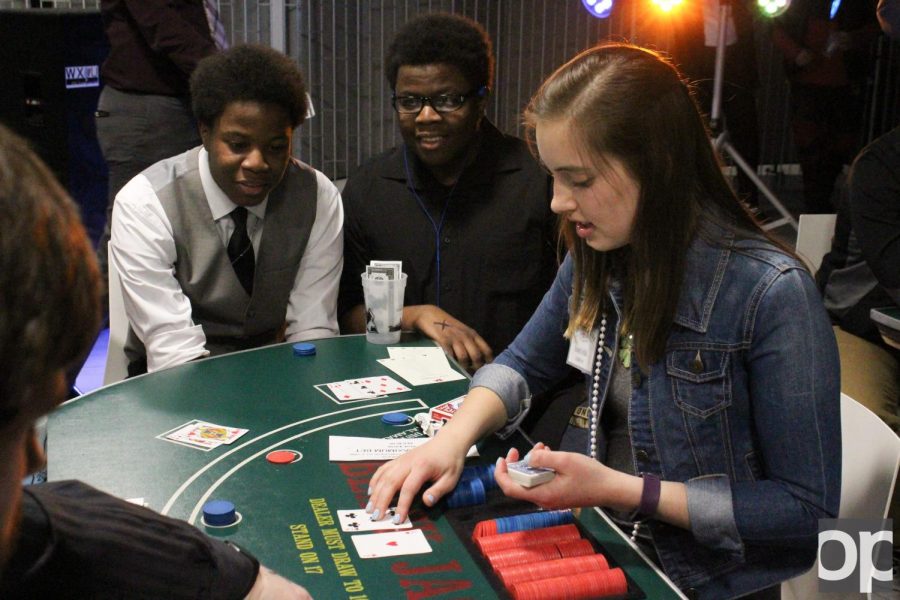 The Oakland Center was transformed into a first-class voyage aboard the Titanic for Oakland University’s annual Casino Night, which took place on Jan. 20.

The Titanic-themed event was complete with a variety of card games, food, mocktail drinks, prizes and live entertainment from world-renowned hypnotist Sailesh.

The Student Program Board (SPB) and Oakland University Housing officially began planning for Casino Night back in November, though early discussions began during the SPB’s trip to the National Association of Campus Activities (NACA) conference in October.

“[Sailesh] performed at the NACA conference back in October, so that was where the students saw him and thought he would be a good addition,” SPB adviser Stephanie Jurva said. “He’s a really great entertainer.”

Casino Night is known as “the biggest event of the winter semester.” Jurva says, though SPB is “always looking to improve and make it better than it was before,” this year proved to be a particular challenge given the construction and recent flooding in the OC.

However, the organizers of the event worked very hard to ensure the limited accessibility of the OC wasn’t problematic.

“The Oakland Center worked with the planning team to help make the event a success and think outside of the box for some of our traditional pieces of the event,” assistant director for residence life Sandra Alef said. “The event could not happen without the over 150 student volunteers and hours upon hours of hard work and planning.”

They were also reassured by the enthusiastic response to the event’s Titanic theme, which was proposed by the SPB annual events director Mackenzie Hill. The theme couldn’t be timelier—Casino Night took place exactly a month and one day after the twentieth anniversary of the 1997 film.

“We talked about another theme and I honestly couldn’t even tell you what it is right now, ‘cause we were all kind of like, ‘Yeah, Titanic is the way to go,’” Jurva said. “I’ve been noticing a lot of things about ‘Titanic’ on social media, especially the whole ‘Jack could’ve gotten on the door’ thing.”

This year’s Casino Night even featured a Titanic-themed prize pack, including a Blu-ray copy of the film in 3D, a collectible brick model of the ship and the Heart of the Ocean, the prized jewel that prominently appeared throughout the film.

Among the other prizes were Red Wings tickets, an Xbox One and a 40-inch Samsung TV. Over $4,000 worth of prizes, many of which came from SPB shopping sprees online and Great Lakes Crossing, were available for students.

“Casino Night is a great opportunity for Housing to collaborate with the SPB on a major event that reaches so many students,” Alef said. “There is always a ton of energy in the room and something students look forward to all year.”

Aside from student enjoyment, Jurva also hoped there were no recreational catastrophes in lieu of the night’s theme.

“We’ve had enough flooding in the OC in the last six months to last a lifetime.”