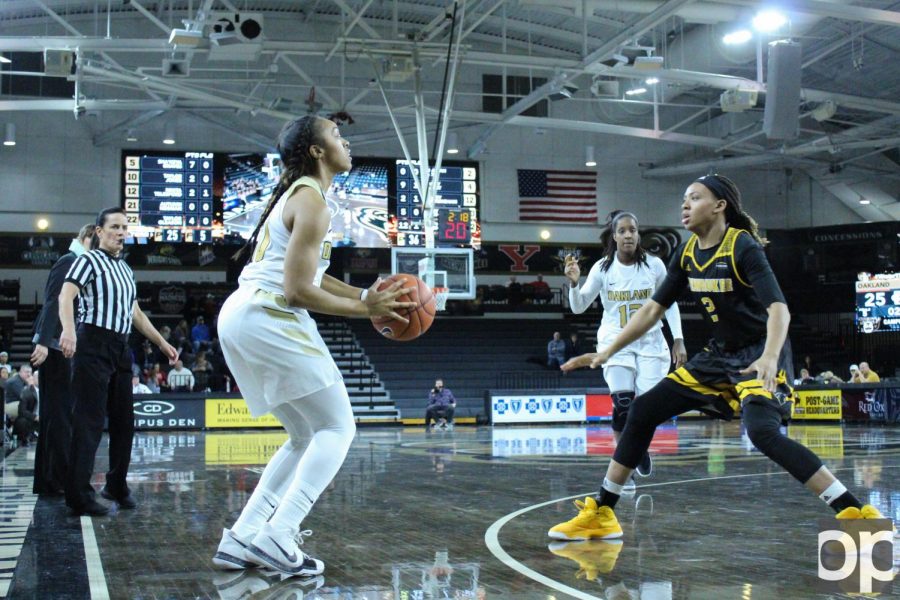 A standing ovation rang throughout the O’Rena before the women’s team faced off against Milwaukee as the audience celebrated senior Taylor Jones’s career for reaching 1000 career points as a Golden Grizzly. Only 28 players in the history of Oakland Women’s Basketball have scored 1000 points over a career.

“It’s a great accomplishment,” said head coach Jeff Tungate. “It’s a real credit to her hard work, the amount of time she spends in the gym, and her teammates who help make her better. I was really happy for her, really proud of her accomplishments, it was something she should be very proud of.”

The mood quickly changed when the Milwaukee Panthers gained the upper hand, leading 11-5 after four minutes of play. The game was back and forth for the entire first quarter, with Milwaukee ahead 20-16.

Milwaukee came into this matchup 4-2 in Horizon League play, and 7-3 on the road. The Panthers are one of the better defensive teams in the Horizon League, holding opponents to 37% from the field.

“I think it’s tough when you go down against a really good team,” Tungate said. “You can’t dig yourself that big of a hole against a good team like that.”

Despite a 40-30 halftime lead, the Golden Grizzlies were able to cut the deficit to four points with off ball movement that led to back to back three pointers from Jones and senior Taylor Gleason.

The comeback was in vain however, as Milwaukee stretched the lead back to 8, going on a 10-4 run to close the third quarter.

“You work so hard to fight back, but against a good team like that once you get back then they’re going to keep going.” Tungate said.

The Golden Grizzlies were unable to come back again, as they lost by a score of 74-62. Oakland fell to 10-8 on the season and 3-4 in the Horizon League. Frustration was the collective mood of the team postgame.

“I feel like we didn’t rebound well enough,” Jones said. “Myself included, I don’t think I played well, I missed out on a few rebounds.”

The team expressed a desire to move past the loss, and focus on improving their game – specifically their offense – for their next opponent, the Green Bay Phoenix.

“We just have to score the ball,” Gleason said. “We have to get rebounds. It’s a big issue we have to correct.”

The team hosts another strong defensive team on Jan. 20 as they play Green Bay, who allows an NCAA Division I low 47.4 points per game.