The Bolivian Revolution comes to OU 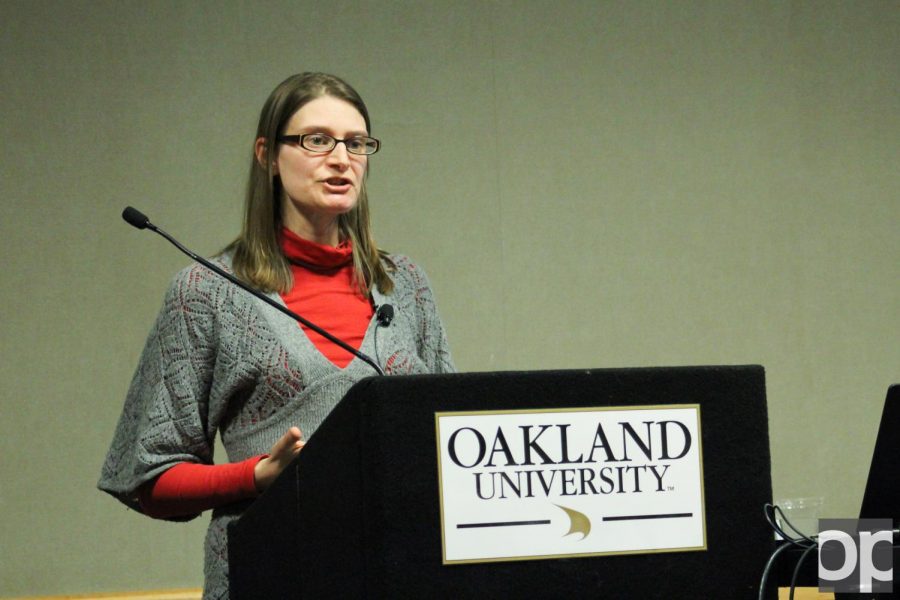 “This is our first installment of the lecture series for 2018,” said Todd Estes, a professor and chair of the history department at Oakland. “This is the 14th year of History Comes Alive.”

This month’s lecture on Jan. 17 was given by Elizabeth Shesko, an assistant professor of history, and titled “What Difference Did A Revolution Make? Military Service in Post-1952 Bolivia.” It explored the relationship between the military and the government and how military service changed after the revolution.

“This was a moment when workers took to the streets and overthrow a military government and put a reformist government into power,” Shesko said.

Bolivia is right in the center of South America. It’s one of South America’s two landlocked countries and lost its coastline in the war of the Pacific which was fought against Chile in the late 1800s.

“Since colonial times, Bolivia’s economy has been based on mining,” Shesko said. “This meant silver from the mountain Cerro Rico, which is known as ‘The Mountain That Eats Men.’ As the name suggests, thousands of indigenous Andeans and enslaved Africans died mining.”

What began the Bolivian Revolution was the infamous and ill-advised Chaco War.

“This is an important event in Bolivian history because it really leads directly to the revolution,” Shesko said. “In the war, Bolivia mobilized about 10 percent of its population and about two to three percent of the total population died in the war.”

The revolution came in 1952 when the conservative Nationalist Revolutionary Movement (MNR) came into power, immediately passing universal suffrage, mine nationalization and agrarian reform, which became the biggest piece in military attitude later after the revolution.

Before the revolution, land was largely held by estates. The Agrarian Reform Law abolished forced peasantry labor and established a program of expropriation and distribution of the rural property of the traditional landlords to the Indian peasants.

The main crux of change came from the military. Participation and enlistment became mandatory, but with that came a new attitude. Military members, instead of feeling punished with forced participation began feeling gratitude and obligation. Military service became a part of daily life, not something to despise.

“This is a huge contrast to what I see before the revolution,” Shesko said.

This military service came to be seen as a rite of passage and an obligation rather than viewed as a piece of life being taken or a dreaded punishment. For many countries that require military service, this holds to be true as well, though there was tremendous gratitude attached to it for Bolivians in this period.

Despite this changing attitude and success, power was passed from the MNR to various military dictators and began a time of instability.

“The broader story that I’m telling you is about how revolution becomes more conservative over time,” Shesko said. “About how the military played a key role in it and how the revolutionary government really tried to use an institution to indoctrinate people and then that thought turned on them.”