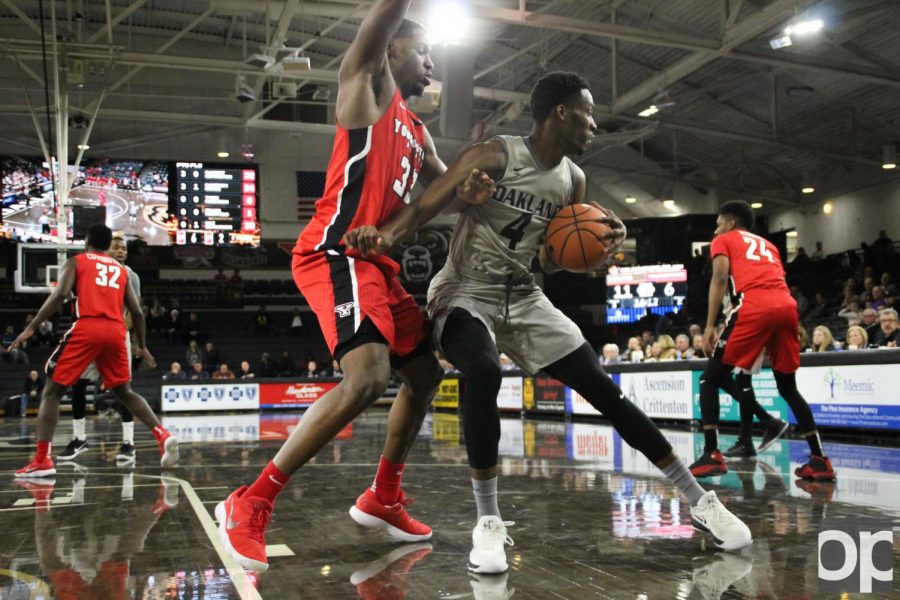 A four game losing streak would mark Oakland’s longest losing streak this season, and the longest since 2014. With the 5-11 Youngstown State Penguins visiting the O’Rena, the Golden Grizzlies looked to turn their Horizon League record around. They would do just that, winning by a final score of 95-82.

Both teams were playing at maximum speed to start this game, shooting very shortly into the shot clock and running on the fast break. After only six and a half minutes, the score was 20-12, with Oakland leading.

For the majority of the first half Youngstown State utilized a zone defense in an effort to create turnovers. However, the Black and Gold were able to properly exploit the defense, continually finding the open man for three pointers. The team made 8 -10 from three point range in the first half.

“Offensively in the first half you couldn’t play better than we played” Head Coach Greg Kampe said. “The ball moved, we got good looks and we made them.”

The Golden Grizzlies held a 16 point lead at the end of the first half, in large part due to excellent ball movement and shooting. Oakland shot 70% from the floor, and had 15 assists on 19 made field goals. The domination on the backboards helped the halftime lead as well, Oakland outrebounded Youngstown State 20-10.

Youngstown State put up a fight at the start of the second half, cutting the lead by nine to seven points with seven minutes remaining in the game. However, Oakland went on a 9-0 run over a minute and a half span to bring their lead back up to 16.

From that point on, Oakland held onto their lead and buried the Penguins with physical defense and solid rebounding. With a final point tally of 95, the Golden Grizzlies put up one of their highest scoring games of the regular season.

Jalen Hayes broke out of his recent slump, dropping 20 points and racking up ten boards. Connecting on eight of his ten shots, Hayes made the most of his opportunities tonight.

“Jalen broke out of his little slump tonight with eight of ten” Kampe said. “It was the first time in his career below 50% shooting. Part of that was he’s getting doubled and hit down low, he just has to fight through that, and he did tonight.”

Post game, Kampe had this to say on his teams performances.

“It was a very good win for us tonight, I am very very pleased with the way we played” he said.

After that big win against Youngstown State, the Golden Grizzlies will face a tough Cleveland State opponent on Friday January 12. Now with two Horizon League wins under their belt, Oakland plans to go on a tear through conference play.