An inside look at the new Hillcrest Hall 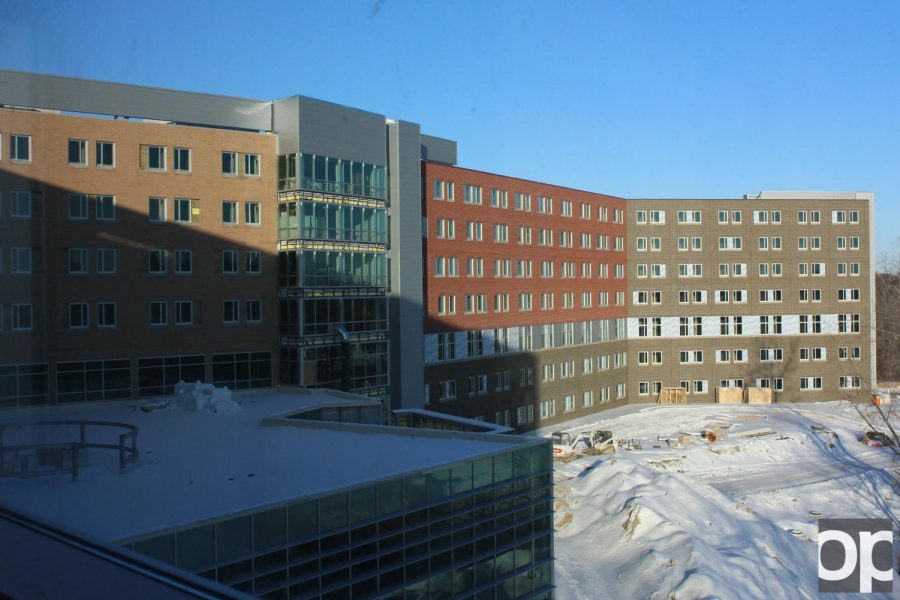 This fall, Hillcrest will surpass Hamlin as the largest residence hall, with 750 beds.

Built into a hill on the southern end of campus sits the developing skeleton of Hillcrest Hall. When it opens, it will become the ninth building to serve as a residence hall at Oakland University. Far removed from the rest of Housing, the building is planned to house upperclassmen who have classes in buildings like Pawley Hall, Varner Hall and the Engineering Center.

The building is still a hardhat area and remains rather bare, but it is on schedule to open in the fall semester of 2018. The construction crew continued to work over winter break to ensure a smooth opening.

“I was in this building just before winter break and it already looks so different,” said Kelly Garnett, Housing’s assistant director for enrollment and marketing. “It’s like walking into a new building every time I visit.”

As the building is so far away from the rest of Housing, it will offer some features that are not in the other residence halls.

Perhaps most notably, Hillcrest will have its own cafeteria with 400 seats along with a 75-seat multipurpose room and a room for private events. Compared to Vandenberg Hall’s 550 seat dining hall, it will sit less people but offer more food options. The cafeteria will also be open to the entire campus.

“The cooking is going to have more of a pod concept instead of everything being pushed behind the scenes,” said James Zentmeyer, the director of Housing. “More of the cooking will be taking place out in the open. There are seven different stations that will have typical home-cooked dining, barbecue cooking and Italian among other things.”

Another food option Zentmeyer is looking forward to is the offering of more gluten-free and lactose-free food for students with those allergies. The seating in the dining hall will also match the themes of the various cooking stations. For instance, Zentmeyer said picnic-esque tables will accompany the barbecue station.

Hillcrest will also offer a fitness center with 30 pieces of equipment ranging from strength to cardio. The center will be staffed by Oakland University Rec Well employees and available to all students whether they are on-campus residents or not. Separated only by a few floors and a glass wall, the fitness center will overlook the dining hall.

The area surrounding the dining hall and fitness center is largely separated by glass. This creates some transparency between floors three, which is the ground floor, though five and allows for a lot of natural light. Floors three through five also play host to a grand staircase.

The suites where students will stay are also unlike the other residence halls. Each room can house four students who will each stay in their own bedroom. The four bedrooms are joined by a large main room with a fridge and microwave as well as plenty of room for a couch and television. The bathroom is separated into two rooms with the shower on one side of the suite and the toilet on the other.

Zentmeyer said a focus group of students came up with much of how the rooms are laid out.

“We worked very closely with 10 different students that were either very active in the university or Housing,” he said. “They sat down with the designers and said they’re okay with four bedrooms to a suite and the split bathrooms instead of one bathroom for four people. They really wanted the shared community space.”

All suites in the building are laid out the same, and they will become the homes for 750 upperclassmen in September.

After two years of website crashes while students tried to sign up for Housing, the department has come up with a new system for the 2018-19 academic year. On Feb. 1 at 8 a.m., the Housing contract will open and will stay open through 5 p.m. on March 1.

Instead of the traditional first come, first served system used in the past, priority numbers for room selection will be given based on credit hours earned. No matter what point a student fills out the contract between Feb. 1 and March 1, the number of credits will determine the priority number received. The more credits a student earns, the lower his or her priority number will be.

“Server crashes and other problems have presented such challenging circumstances to people and created enormous stress to students,” Garnett said. “We want students to be excited about signing up for Housing and not be stressed out or disappointed if something goes wrong.”

The Housing contract can be accessed on Housing’s website.