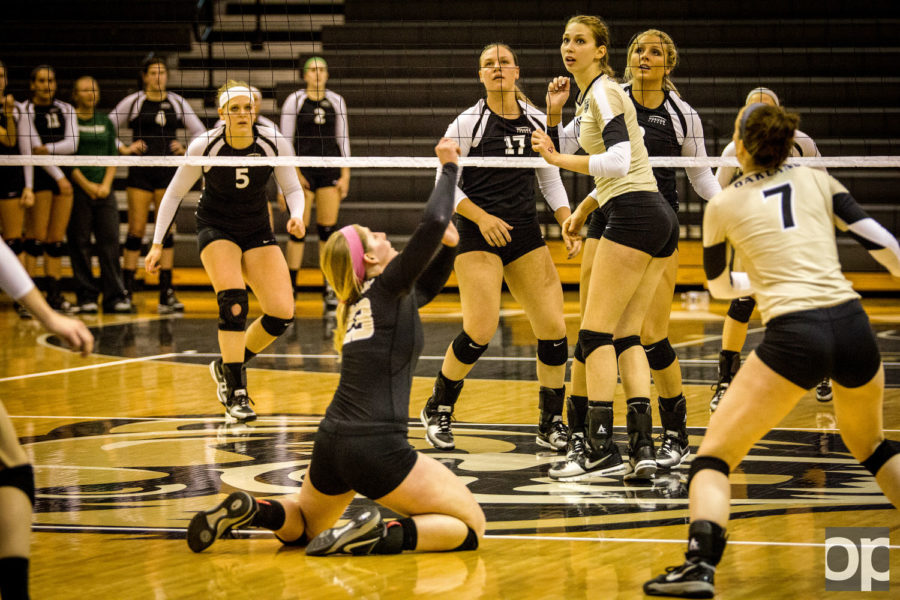 The Oakland women’s volleyball team traveled to Ohio over the weekend to compete in the Golden Flashes Classic tournament, which held several firsts for the Golden Grizzlies.

This was Oakland’s first time in the tournament, first time stepping foot on Kent State’s court and first four-set match of the year.

“I think Kent State has a really good volleyball gym. It was easy to play in and it was well-run and organized,” head coach Rob Beam said.

Despite each tough loss, Beam said he is proud and confident of his team.

“I have a lot of confidence in this team,” Beam said. “I think that the best thing to come out of the performances this weekend is that we were able to narrow down some options and possibilities.

Sammy Condon, who was recently named to the preseason All-Horizon League team, along with teammate Cassie Pelloni, was one of the top players from the tournament with her first double-digit kill match of the season, played well for Oakland.

“Condon played extremely well. She played with a tremendous amount of competitiveness and willingness to take on a much larger role,” Beam said.

“In today’s second match against Kent State, Darien had a really nice match. It was kind of her first opportunity, in her career, to get a start,” Beam said. “I thought Melissa was very team oriented and selfless.”

Ciara Schultz set a career-high 18 digs in the match and racked up 27 assists to earn player of the game against Kent State.

“Lentz is doing a great job. She’s getting to know her teammates and how they like things to be set,” Beam said. “Jordan Massab is doing extremely well and has earned a spot as a primary defense specialist for us.”

Going into this week, the team will have many opportunities to work on new skills and techniques before their next match.

“I think we found some really good things out of the tournament, despite the losses,” Beam said.

The Golden Grizzlies (1-5) will travel to California to play in the Mizuno Invitational Sept. 11.