Under the Golden Sail 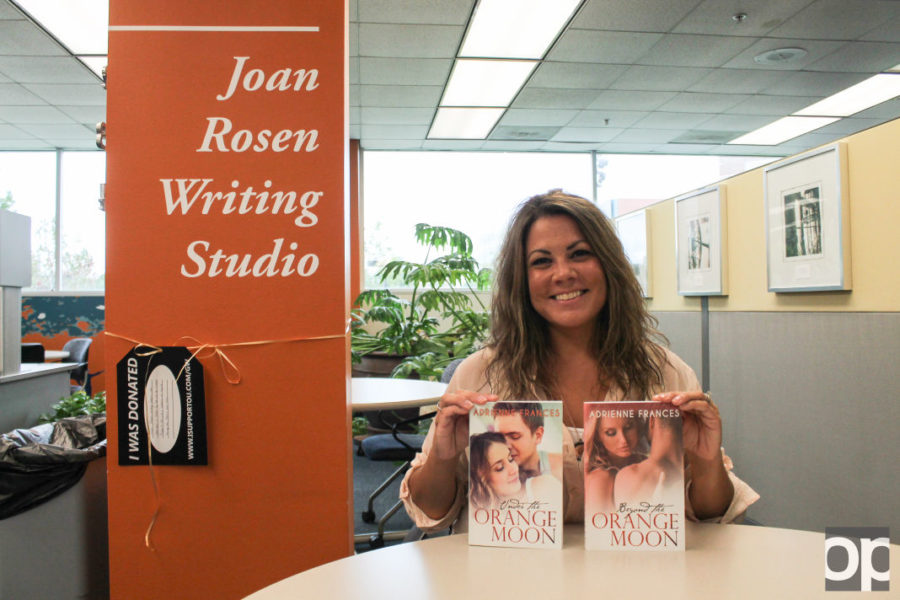 When Adrian Schirr isn't working on her own books, she is a writing consultant in the Writing Center at Oakland University.

I’ve met a lot of writers over the years. Most of them I met through creative writing workshops. I had the pleasure of meeting Adrian Schirr in my first creative writing workshop at Oakland University. We were in Professor Dawn Newton’s class. My first impressions of Adrian were that she was very friendly and knew a lot about writing and editing. We instantly became good friends through that class, and then later took our advanced creative writing course with Professor Annie Gilson.

We’ve learned a lot together over the last couple of semesters. She even helped me out with my own manuscript outside of class, when I would visit her in the writing center located in Kresge Library. Every week, we would read aloud a chapter or two and she would point out the flaws and make suggestions on how to improve. Honestly, the only time I ever went to the writing center was to see Adrian.

It was no different when I met with her to talk about her own book series. We met on Wednesday, August 26th outside of the writing center. We caught up after not seeing each other for several months. She told me about her boys, and I told her about my own progress with my novel – and that I planned on coming back to the writing center to have her read over the sequel. It was a laid back and quiet atmosphere to have our interview. Unlike the other interviews I’ve done with OU authors, there was no book reading for me to go to. It was just me and Adrian, and the two books sitting between us on the table.

Being a writer is no easy task. It requires time, patience, creativity, blood, sweat, and tears. Lots of tears. Add school, work, a husband, and two teenage boys into the mix, and writing can become a challenge.

“I don’t get a lot of time to myself,” she told me with a laugh when I asked her when she has the time to write. “But you get used to balancing it all. I get most of my time to write and night and during the morning in the summer time.”

She told me about how her family knows to leave her alone to write when she locks the door and shuts off her phone. Then, she sets a goal for herself.

For those unfamiliar with how many words that is, it’s roughly 30 pages of manuscript.

In addition to that, also needs total silence to write. Sometimes she will turn on music to get in the mood for scenes she’s stuck on, but usually peace and quiet with her thoughts is all she needs.

Despite her strong passion for writing, she still loves to be a mom more than anything else.

“I still prefer doing the mom stuff. I can always write, but I’ll never be able to do all this stuff again with my boys,” she said. “I’m happy to be a student and that they can see me going to college. They’ll see me graduate. I think it makes them want to do it more.”

Although Schirr has a lot of support from her family, and she even created her pen name, Adrienne Frances, to tribute her grandmother.

“Frances is my grandmother who I was named after, so that’s where the last name came from. I spelled Adrienne the feminine way because mine is spelled the masculine way. I didn’t think women wanted to read romance novels written by a man. Unless it’s Nicholas Sparks,” she explained with a laugh.

The Mathews Family and “The Orange Moon” Series

The Orange Moon series was inspired by a single vision in Schirr’s mind one day. She saw the image of a man sitting at an airport, and that sparked the idea for the first novel.

Unlike her other books, her first novel was written on a whim without any outline or direction. All Schirr had was the man in the airport. Ben.

“When I wrote Under the Orange Moon, I didn’t know I needed an outline,” she told me. “Beyond the Orange Moon was completely outlined and was written in roughly two months. I’m more of a successful writer when I have an outline.”

She has the rest of The Orange Moon series outlined completely, which includes four more books. The third book features the oldest of the Mathews’ clan, Hugh, and the fourth follows Dylan’s twin brother, Jonah.

Schirr also told me about her odd way to becoming published. First, she self-published, but then the daughter of a small publisher stumbled upon her book and passed it forward. The publisher, Bandit Publishing, decided to pick her up. This is not the norm for most novels.

“It was a completely different process from self-publishing,” she explained. “With self-publishing, you have to market yourself every single day, all day long. It can’t just be on Facebook either. It’s tricky and really discouraging because you sometimes feel like you’re dropping your work into a big black hold and don’t know what’s going to happen. On the other hand, you can make your own direction. You don’t have to go with a certain way. Your entire vision, you can do. You can’t do that with a publisher.”

She continued to explain that publishers essentially control everything: the price of the book, the cover, the blurb written on the back, and even the copy editor that makes changes to your manuscript.

However, she explained that she would rather make “a dozen wrong turns than never make a move.” Self-publishing first worked out well for her, and she would suggest it to most writers who are starting out.

“Try it out. If your first book doesn’t succeed with self-publishing, try to aim for a publishing house. Nowadays, you really can’t do it wrong.”

As an Oakland University student, Schirr has access to the Writing Center for all of her writing needs. In addition to that, she works there as a consultant for other students to come for help.

“I think the writing center is really beneficial to students because there are a lot of people who don’t understand writing,” she explained when I asked her what she thought about the writing center. “I’m terrible with numbers, for example. Some people don’t have the brain for writing, and they can get help here with content and sentence structure.”

She also mentioned that the writing center is a good resource for those who do have a solid understanding of writing, especially creative writers.

“If you’re writing a novel, come to the writing center. It’s free editing!”

“There’s so much pressure when you’re writing,” she explained. “The first book was easier because I didn’t know what I was writing for, but the second one I’m worrying about chemistry, and old reviews. As a writer, you’re constantly in your own head. One day you reread what you wrote and you hate it. The next, you love it. The writing process if a love hate relationship. I can edit all day.”

That is exactly what she does. When Schirr isn’t in class, taking care of the kids, or writing on her latest romance, she’s at the writing center helping other students get through their essays.

One of her biggest tips to writers is to not edit yourself. Having others read your work helps find mistakes you skim over. She also suggests not deleting anything right away, and to instead sit on it for a couple of days and see if you change your mind.

Something else she emphasized was to write for yourself and not for an audience – which is easier said than done.

“You have to have thick skin as a writer. There are some mean people out there who say nasty things about your book. After a while you realize you can’t please everybody,” she advised. An example she gave me was Ben. She told me that a lot of readers hated Ben, while others loved him. The negative reviews can sometimes outweigh the positive ones, and that can be disheartening.

“There’s a lot of self-loathing in writing, and you can get really discouraged. Just remember that you’re a writer because you love to write, not because you want to make money.  So don’t quit.”

Our interview ended on a sentimental note, when Schirr described her gratitude to everything Oakland University has given her.

“I think that my education here at OU has made me a better writer. I’m thankful for Annie Gilson, I don’t think I’d be the writer I am today without sitting in front of her,” she said with a sense of nostalgia.

Read my review of Under the Orange Moon.