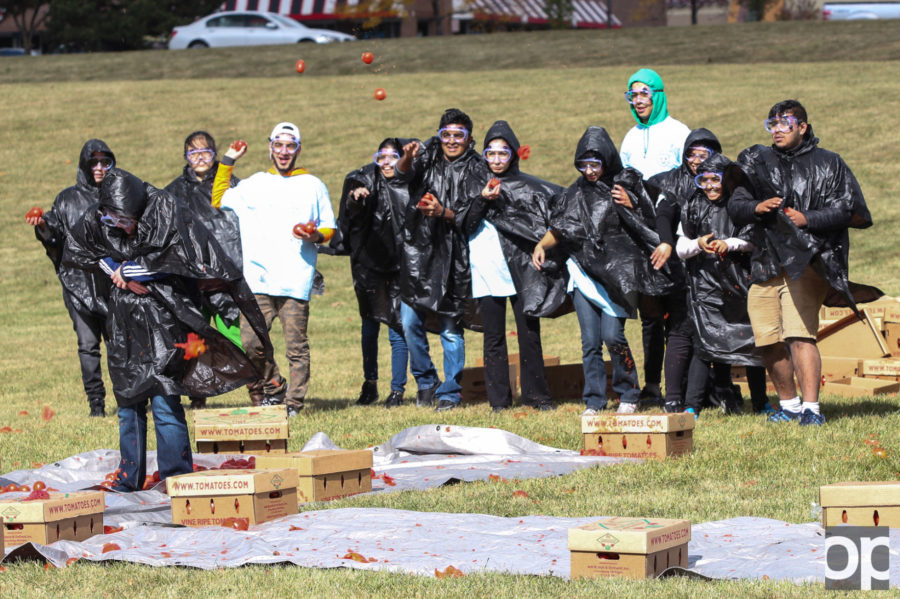 However, this was not part of an angry uprising against produce as it may have looked to those driving by at the intersection of Walton and Adams. Rather, this was La Tomatina, an event planned by the Center for Multicultural Initiatives in partnership with OU Student Congress.

In addition to the tomatoes that were being thrown, a tarp was draped over the field on which many more tomatoes were thrown to make the ground slippery and add to the mess and chaos.

Overall, one and a half tons were used for the festivities of the three tons of tomatoes that the event started with. The rest were donated to Forgotten Harvest.

Spanish for simply “the tomato,” La Tomatina is a tradition that started in Buñol, Spain in the 1945. It started as a celebration in honor of the surplus of the agriculture that the country was experiencing.

People began throwing the unsellable, overly ripe tomatoes at each other, and soon the whole community was abuzz with this messy game. Beginning as simply a small number of people who participated and morphing into a government-sanctioned event, La Tomatina has since been an annual tradition in Buñol.

Although, this is the first time that it has occurred at OU, as it was part of this year’s Hispanic Heritage Month.

This month is an annual tradition full of events put on by the Center for Multicultural Initiatives. It began on Monday, Sept. 21 with a guest lecture about racial discourses in colonial Mexico and will end on Oct. 23 with La Latina, an event dedicated to enriching the skillset and preparedness of Latina women.

Diversity and inclusion director of OUSC Anders Engell said that Hispanic Heritage Month is done in an effort to give students a “cultural experience.” According to Engell, this is achieved by creating events to educate students on something outside what they might already know.

“We want to show people the true side of Hispanic culture and the heritage that that culture comes from,” Engell said. “Oftentimes you’ll see that people have their own ideals or stereotypes that they’ll associate with a specific group because of whatever media they have been influenced by.”

As part of the month’s events, those involved have spent much time in community-building events in which many non-Hispanic students were able to interact with Hispanic Americans in Detroit. The students and heard stories about the lives of those impacted by the plights that much of the Hispanic American population has to face in their lives.

One of these aspects of Hispanic Americans’ lives is in the fact that tuition equality for college students does not exist for a vast majority of Michigan schools. This means that an undocumented student may not be eligible for the same scholarship or grant opportunities that documented students are.

OUSC and the Center for Multicultural Initiatives are working to raise awareness about these and other issues in the near future, including guest lectures, protests, and other events. They have already announced that La Tomatina will happen again next year.