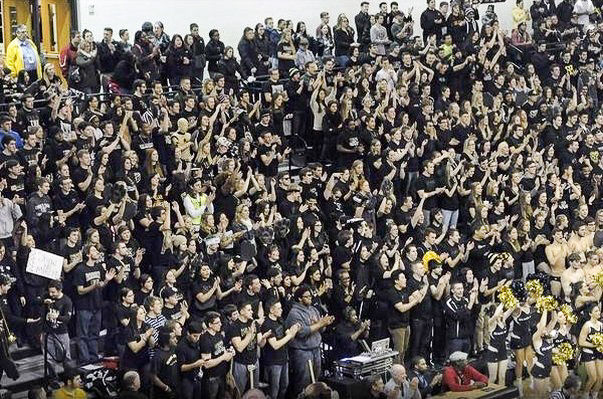 For over 30 years, Oakland University's Grizz Gang has been in the cheer section of the O'rena.

The 2015-16 class of Grizz Gang members are back and ready for basketball season to fire up. In the second year of the new athletic administration, Coordinator of Marketing and Promotions Taylor Blakely has made plenty of changes to the program, especially with how they’ll interact with the fans.

“One of the big things we’ve done is created a liaison position, Leann Schnurer, who attends every Grizz Gang meeting. We had open communication throughout the summer,” Blakely said. The change has created open communication between the student group and the administration.

Members of the Grizz Gang say that their goal this year is to get the teams on their side. “We want the players to know who we are,” Alex Leidal, treasurer of the group, said.

Leidal also said they’re planning social media shout-outs to the players with the goal of having the students and the athletes connected.

Stocker added that there will be several themed nights to enhance the game day experience this year, including a pajama night and a glow rage event.

Blakely was eager to talk about some of the changes to the O’rena this year. “We’ve got brand new lights and a new PA system … The voices won’t be so muffled anymore,” Blakely said.

New pregame video introductions will be showing, similar to the Piston’s pregame presentations at the Palace. A new job was created, the director of video content services, specifically for this purpose.

A pep rally is planned for the Grizz Gang next Thursday, Nov. 5 in the Oakland Center. The group will be practicing some of the new chants and free Buddy’s pizza will be offered to all who attend.

Looking ahead to the season, the Grizz Gang along with athletics is planning several road trips, though they are still in the works. For the Michigan State game at the Palace on Dec. 22, athletics is offering a package for students including a game worn jersey and a ticket for $15.

According to Jean Ann Miller, director of the CSA and leadership development, there is a bus trip planned for the University of Detroit game on Jan. 16.

More information can be found on the CSA. To join the Grizz Gang, attend the pep rally next Thursday in the OC.