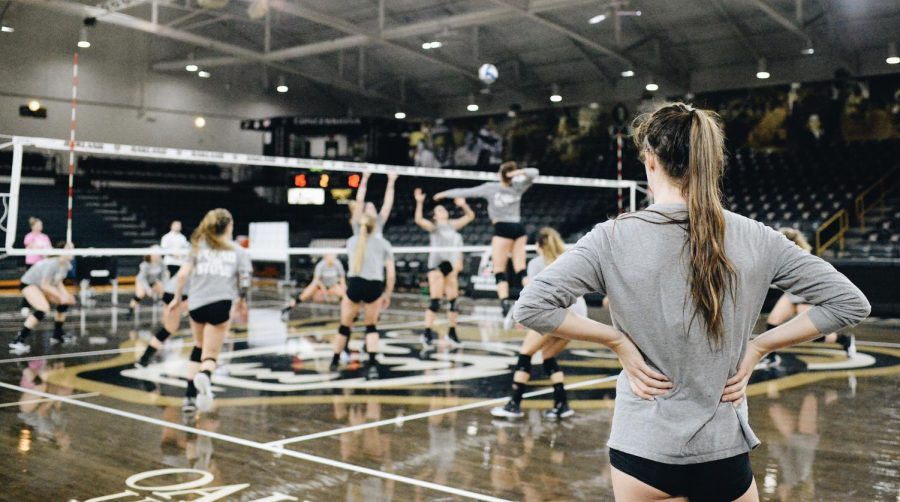 Picture this: One year old Darien Bandel chasing a volleyball around the floor with her parents watching close by.

This has been Darien’s life for as long as she can remember and she cherishes every second when she’s playing the sport she loves.

“As soon as I could walk I was playing with the ball and I was even playing pickup games with my parents when I was seven or eight,” Bandel said. “My parents both play and that’s actually how they met, so I feel like I was kind of destined to play.”

Coming into the season, Bandel had high expectations. But she soared above and beyond those expectations, and produced one of the best seasons in Oakland’s history. Over the course of the regular season, Bandel averaged 4.34 kills per set and a total of 482 kills which led the Horizon League.

This explosive offensive performance did not go unnoticed and Bandel garnered some serious hardware. She was named to All-League First Team, Offensive Player of the Year and the Horizon League Player of the Year, the highest award given to any player.

Head Coach Rob Beam has had the pleasure of coaching Bandel for all four of her seasons at Oakland and he had a lot to say on her season.

“Being named Player of the Year, along with Offensive Player of the Year, is a tremendous honor for Darien, as well as our program,” Beam said.  “She was outstanding all season against every level of opponent.  She carried a huge load for our team and delivered time and again, despite our opponent’s focusing their defensive energy on stopping her.”

One person Bandel gives a ton of praise and thanks to is her setter Jordan Lentz. Lentz is a sophomore at Oakland and one of the team captains.

“She [Lentz] has already lived up to her expectations,  she’s already sixth in our program in assists and it’s only been two years,” Bandel said. “ She’s a huge part of this team and we wouldn’t be where we are without her.”

Another one of the things that has had a huge impact on Bandel’s volleyball career is her coaches.

“I’ve had such a good long relationship with him [Rob Beam], he’s family,” she said. “Eric my assistant coach he got me into my AAU team when I was 16 and he’s absolutely a huge part of what I am today. My other assistant coach Claire, she’s our mom and she’s been a huge part as well. Our volunteer assistant coach Gabe, he’s become even less of a coach and more of a best friend to me.”

After a fantastic senior season for Bandel, the kills might not stop here. According to Beam, a career in professional volleyball is not out of the question for Bandel.

“We have recently discussed her playing professionally after she graduates and I think her dynamic ability, big arm and now ball control skill, will make her very attractive at the next level,” he said.