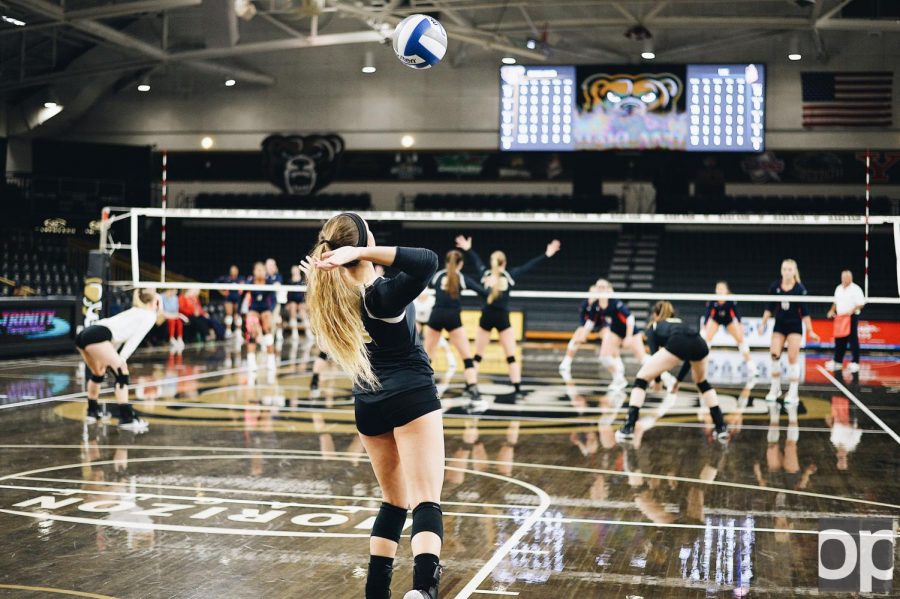 The golden Grizzles handily defeat UIC and prepare for the end of the season tournament.

One game away from the Horizon League Volleyball Tournament the women’s volleyball team went toe to toe against the UIC Flames with hopes of finishing off the regular season on a strong note. The Golden Grizzlies are coming in on a hot streak with wins in five out of their last six games.

The first set was a back and forth battle where UIC eventually prevailed and took it 25-21.  Freshman Jamie Walling led Oakland with five kills and a block along with it. Senior Darien Bandel added three kills and a dig while senior Darrin Rice tacked on five digs as well. Down in a quick 1-0 hole the Black and Gold looked to bounce back in the second set.

In another set filled with controversial calls and coaches challenge cards flying in left and right, the tension in the air was palpable. This didn’t phase the Golden Grizzlies one bit. The team did just what it needed to and dominated the second set with a score of 25-19. It was block after block for Oakland as they had six in the second set. RS junior Krysteena Davis led the team in that category with a sold three blocks. Meanwhile, Bandel put up a smooth six kills to lead all scorers. With the game tied at one set a piece, both teams came out of the gates firing in the third set.

Oakland continued its dominance in the third set as they cruised to a 25-18 set win. Bandel, Davis and Walling led the way as the Golden Grizzlies made quick work of UIC. Up 2-1 in the game and with just two sets to go the Black and Gold looked to finish UIC off in the fourth.

The Golden Grizzlies showed no mercy in the fourth and final set as they dispatched the flames with a score of 25-19 and a 3-1 game win. Over the course of the game Bandel led the way with a total of 18 kills. Davis put up an astounding 8 total block assists and RS sophomore Jordan Lentz had an outstanding 41 assists for the day.

Riding this solid win streak into the Horizon League tournament which starts on Friday, Nov. 17 the seniors for the Black and Gold will look to lead the team to victory. When asked on what it would mean to win the tournament Condon and Rice had this to say:

“It would mean everything to us, last year was a heartbreak and this year is just different, we can feel it,” Rice said.

When Bandel was asked on how the play of the underclassmen has benefited this team throughout the season she said:

“Our freshmen are amazing, they’ve dialed in and they just really feed off of what the older girls do but like I said they’re amazing and they don’t need the leadership, they’re leaders on their own.”

Assistant coach Gabe Schmidt has always been a face of positivity for the girls out on the floor. He is always the first person off the bench to congratulate his players as they come off the court.

“I just want the first thing they hear to be a positive voice instead of their own voice,” Schmidt said. “As a coach I’ve always found it best to have a positive standpoint and then make corrections later. After today we have found our stride and we know what kind of level we need to play at. I believe we will be coming home with the Horizon League trophy.”