Basketball media day bridges the camera and the court 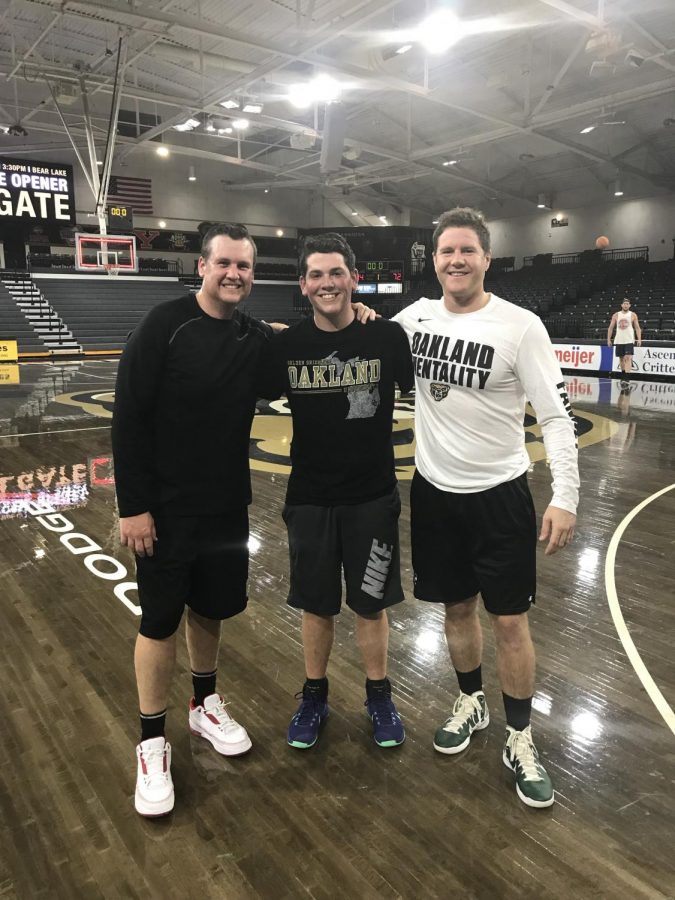 Players and coaches filed out of the locker room for a average day’s work on the Blacktop with just one thing out of place. A usually quiet O’rena was bustling full of media members from around Metro Detroit trying to get their first looks at this highly-anticipated Golden Grizzlies men’s basketball squad.

For 30 straight minutes it was non-stop drills for forwards on one side of the court and guards on the other. Photographers circled the court trying to snap the perfect shot and reporters waited on the sideline for their chance to interview a couple of the guys.

After practice, reporters worked their way over to interview some of the big name players such as Kendrick Nunn and Jalen Hayes, while others surrounded Head Coach Greg Kampe to get his thoughts on the season and how the leadership for this team is looking this year.

“A player-coached team always beats a coach-coached team and I firmly believe that, and if our players aren’t out there coaching it’s going to be a tough year,” Kampe said.

For some of the younger guys like freshman James Beck, it is a whole new atmosphere. When asked on what the transition was like from high school to college he said:

“At first it was kind of tough getting used to the new fast pace of college, but now I’m getting used to it and it’s going pretty good. We’ve definitely bonded together as a team.”

Xavier Hill-Mais is confident that the Golden Grizzlies are ready to take on the toughest of opponents.

Following player and coach interviews, there was a press conference with Kampe and John Ciszewski, who is senior vice president of sales for Olympia Entertainment. Ciszewski started with an opening statement on Oakland University’s men’s basketball team’s future with Little Caesars Arena and Olympia Entertainment. The Golden Grizzlies will be taking on the Michigan State Spartans on Dec. 16 at Little Caesars Arena.

“I’m actually here to talk about three big basketball events, two that Oakland is already committed to play in and a third we are expecting them to play at,” Ciszewski said. “The first being the double header in December with Oakland playing Michigan State and sales are great for that already, we have 14,000 tickets sold for that and we definitely expect to sell out for that. We designed Little Caesars Arena to look like people are hanging from the ceiling and on that night we definitely expect that.”

Kampe and women’s Head Coach Jeff Tungate followed with opening statements on their teams and what they expect out of them with the season right around the corner.

Tungate finished up the press conferences with a statement on his outlook for the season.

“The one thing we’ve been really talking about with our team is that when the women’s basketball tournament is played at Little Caesars Arena, we have a chance to be the very first athletic champion ever at Little Caesars Arena,” he said. “I think that would be a special moment for our team and our players, and that’s what we are working towards.”

After the press conferences, there was lunch provided by Oakland Athletics and then it was off to the locker rooms to suit up for the media basketball game.

The media basketball game is an annual event Athletics puts on as a fun way to kick off the season for the reporters and members of the athletic program. The Oakland Post had the opportunity to play in the game, which was a 74-72 nailbiter that took an overtime to finish.

An event like this serves as yet another way to get everyone excited for the start of the season. It also gave members of the media great insight on what to expect from this team who are polled to win the Horizon League Championship and advance to the NCAA tournament.