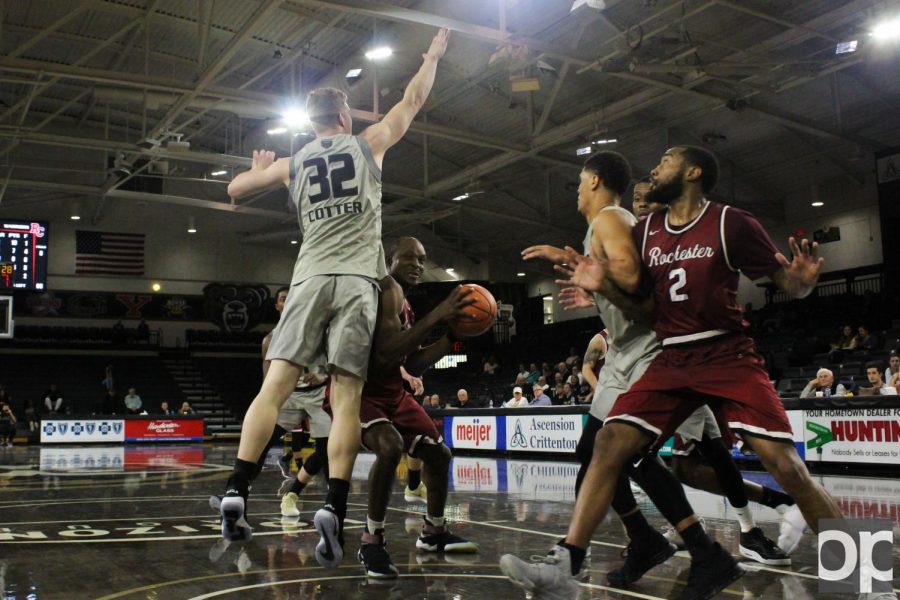 On Thursday night with the regular season just peaking around the corner, the Oakland University Golden Grizzlies took on the Rochester College Warriors in an exhibition match. The Black and Gold looked to extend its winning streak over Rochester College to 18 straight games.

Oakland got off to a strong start going up 31-16 with eight minutes to go in the first half. Led by freshman James Beck and senior Martez Walker who ran the court faster than Rochester College could keep up with. By the time the first came to a close, Rochester started to inch its way back into the game and trailed Oakland 41-36. Walker led everyone in scoring with 13 points while Beck and sophomore Chris Palombizio were right behind him with eight and seven points respectively. After a rough first half, the Black and Gold looked to bounce back with a strong second half.

Oakland came storming out of the gates in the second by scoring on its first five possessions of the half. The team ran the score up to 71-56 with ten to go and never looked back.

Kendrick Nunn led the team in scoring up to this point with 17 points. The Black and Gold coasted the rest of the way finishing the game with a final score of 91-73. Four players put up double digit point totals for Oakland, Nunn-17, Walker-16, Neely-13 and Beck-10. It was an impressive performance and a great practice for regular season games which are rapidly approaching.

One of the players who had an impressive game was guard Brailen Neely. He led the team with seven assists, tagging along 13 points and three steals.

“Just being around the team, the guys trust me, the coaches trust me,” Neely said. “It’s like a big family and I couldn’t do it without my teammates, they make me feel comfortable. I know what to expect this year, last year it ended how we didn’t want it to and this year we’re just coming out angry like coach says.”

Fifth year senior Walker has been around for long enough to know talent when he sees it and when asked how freshman Beck performed, he said:

“He was great tonight, he had big minutes for us and coach tested him in the locker room and said what are you going to do tonight? And [Beck] stepped up to the plate tonight.”

Head Coach Greg Kampe was very impressed with how his guys played against Rochester College in this game.

“I thought this was a great exhibition game tonight, just what we needed and I like to play them, they’re always a well coached team…” Kampe said. “It was exactly what we wanted and I saw a lot of different guys playing meaningful minutes. For me I couldn’t ask for anything better than what happened tonight.”

With another exhibition game under the belt, players like fifth year senior Jalen Hayes can’t wait to start.

“This has been my best, but longest summer here, we are all just itching to get out there,” he said.

The Black and Gold look ahead to its final exhibition game of the season against Davenport and then the gloves come off for the start of the regular season on Nov. 10 at the O’rena.