Men’s Basketball takes on the Chippewas in Hurricane Relief Game 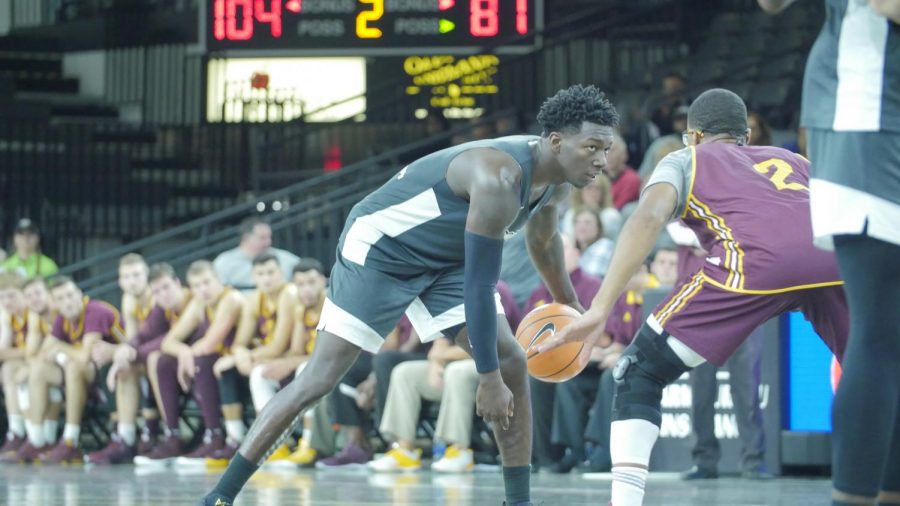 The Golden Grizzlies squared off against the Central Michigan Chippewas on the Blacktop at the O’rena for an exhibition game that meant more than just basketball.

In past years both squads had ran a joint closed scrimmage, but after recent events both coaches decided to turn the game into a hurricane relief fundraiser with all of the proceeds going to people affected by these horrific natural disasters.

The Black and Gold got off to a hot start taking a 22-15 lead halfway through the first half. Kendrick Nunn and Martez Walker both had great starts to the game. Oakland extended its lead to 58-39 by the time the half rolled around. Nunn had a fantastic first half as a Golden Grizzly, knocking down 22 points along with eight rebounds. As a team Oakland shot 22-32 from the field and 9-15 from three point range.

In the second half the Golden Grizzlies maintained dominance over the Chippewas and brought its lead to 85-64 by the time the second half was 10 minutes deep. Oakland started to run away with the lead as the game came to a close. Nunn and Walker continued to lead the team all the way to the final buzzer.

It was an extreme show of offensive dominance by the Golden Grizzlies in this game as the team coasted to a smooth 108-88 win over Central Michigan.

Oakland was led by Nunn, who dropped an astounding 40 points in his Oakland debut and was just two assists shy of a triple-double. Brailen Neely led the team with 10 assists and Nunn was also strong on the glass leading the team with 10 rebounds. Isaiah Brock had a great game as well adding eight points, nine rebounds and three blocks. An all around impressive win for the Golden Grizzlies.

The Black and Gold had four separate players in double digits for points. Nunn, Walker, Jalen Hayes and Nick Daniels.

“It’s an honor to be here and to be playing in the Oakland jersey,”  Nunn said. “This charity game was for a great cause and I’m glad people came out here to watch us play.”

“It actually felt great, this summer I had to get my priorities together but just the feeling of being back out on the court and with the guys, they’re a great group of guys,” Brock added. “It was a noble cause and we’re out there playing, trying to give the fans a good show and the money is going towards people that need it.”

The Golden Grizzlies look ahead to another exhibition game on Thursday Nov. 2 against Rochester College. With the start of the season right around the corner these exhibition games serve as a great dress rehearsal before the big show.