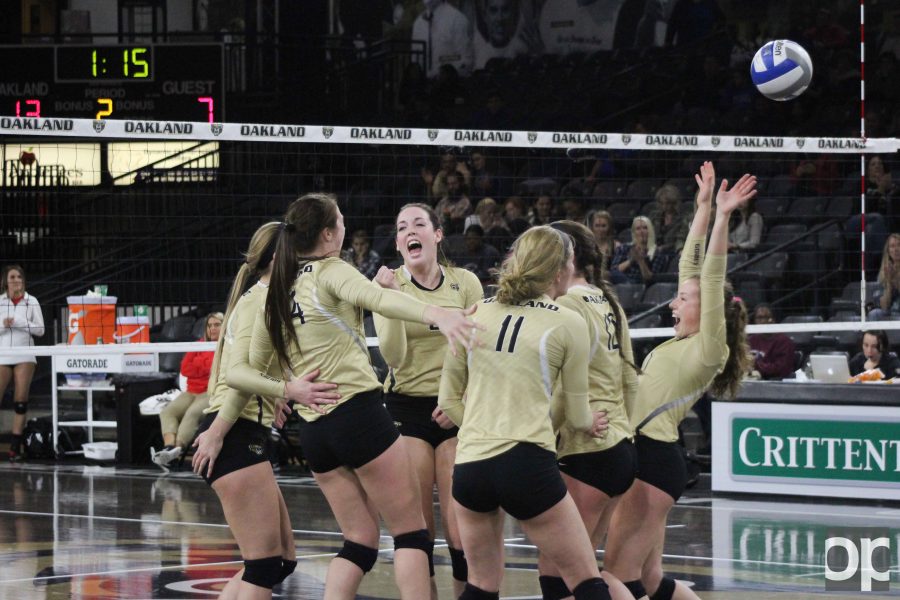 The Golden Grizzlies ended their six game winning streak with a loss to the Milwaukee Panthers.

On ALS Awareness Night, the Golden Grizzlies squared off against the University of Wisconsin-Milwaukee Panthers Friday, Oct. 20 with an emotional tribute to Tom Ford pregame that brought fans to their feet. Ford had been an athletic trainer here at Oakland since 1988 and stepped down from his duties in May after being diagnosed with amyotrophic lateral sclerosis (ALS) also called Lou Gehrig’s disease. He has since been vocal on social media that he plans to fight the disease with everything he has.

Prior to the game, Oakland sat atop of the Horizon League standings with an overall record of 11-9 and a league record of 6-2. Riding a six game win streak, the Golden Grizzlies looked to maintain that streak on Friday night.

Milwaukee got the ball rolling early and snuck past the Golden Grizzlies in the first set with a score of 25-22. However, the Golden Grizzlies didn’t stay quiet for long, roaring back to take the second set 25-18. Led by seniors Sammy Condon and Darien Bandel, the team made quick work of the Panthers.

In the third set the Black and Gold trailed 23-16 and brought it all the way back to 24-23 before Milwaukee rallied back and took the last point that ended with a score of 25-23 in the Panthers favor. The fourth set went down to the wire with the score knotted up at 23 a piece when Bandel put the team on her back and finished off the Panthers with a key kill and block to force a decisive fifth set. In a back and forth fifth set, Milwaukee prevailed with a 15-10 win and a 3-2 game win, giving Oakland its first loss since Sept. 23.

It was a heartbreaking loss for the Golden Grizzlies and emotions were running high after the game.

“It’s just another chance for us to chase teams, and at the end of the season you just have to win one and this will set us back, but we will bounce back from this,” Bandel said after the match.

Bandel has been on the team all four years she has been at Oakland and is a leader on and off the court. One of the younger girls that has been a real asset to the squad is Jamie Walling, who leads the team with a .282 kill percentage and is third in blocks.

“We’re just not thinking too much into this, yeah we lost but it’s over now and we’re moving on to tomorrow and we’re going to put up another good fight,” Walling said.

The girls will then travel to Northern Kentucky on Friday, Oct. 27 to take on the Norse at 6 p.m. The game will be broadcast on ESPN3. With seven games left to play in the regular season and with an impressive 6-3 league record, the Golden Grizzlies have high expectations for a strong finish.