One disease, two brothers and a bone marrow transplant 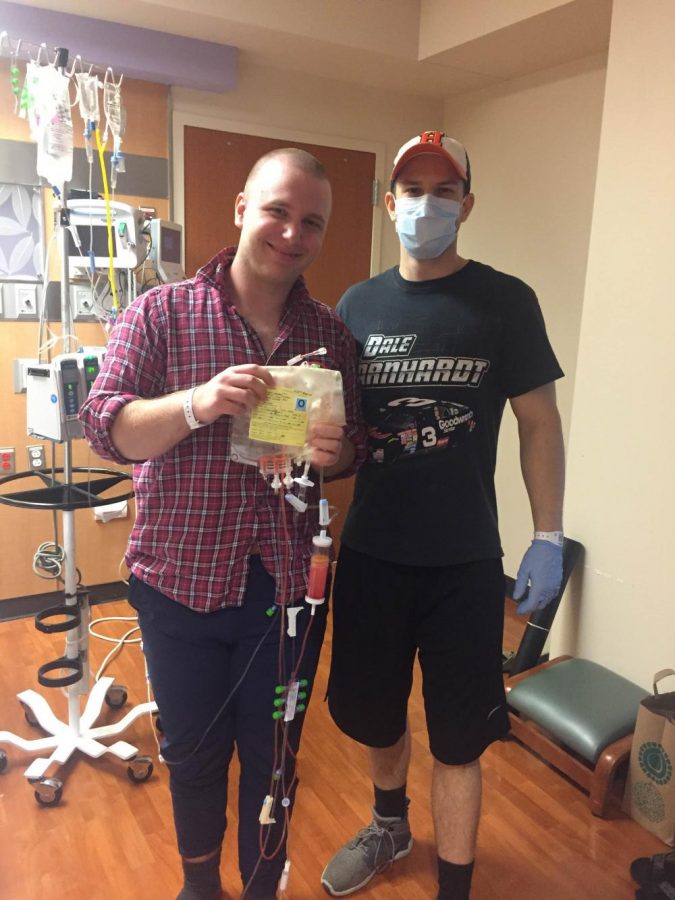 It was a day in January 2017 when Nick Adamson called his older brother, Joseph Adamson, to deliver impossible news: The 22-year-old newlywed had been diagnosed with Blastic Plasmacytoid Dendritic Cell Neoplasm (BPDCN), a rare form of leukemia.

“I had always thought of being able to grow old and visit each other’s houses and go on hunting trips together, and then one day after I ironically was learning about leukemia in class, he called,” said Joseph Adamson, now a second-year Oakland University William Beaumont School of Medicine (OUWB) student. “Being in medical school, I looked it (BPDCN) up. We have access through the library, which is a really good resource most of the time, but then you find out that your brother probably only has two years to live or less.”

According to Joseph Adamson, BPDCN is nearly 100 percent fatal in two years without a bone marrow transplant whether the medication works or not, and the chance of finding a match is one in 40,000.

Although Joseph Adamson had already registered for the donor list through one of OUWB’s drives, initially he was not a sufficient match since only five of the 10 markers matched; however, when it was discovered that Nick Adamson had a rare allele that would make it nearly impossible to find a complete match and since the chances for siblings are greater, his brother was chosen.

The brothers underwent the transplant on Friday June 16.

Despite the fact that the majority of bone marrow donors donate through peripheral collection, which is simply having their blood drawn, Joseph Adamson donated through bone marrow asperation, meaning it was taken directly from his bone.

He was placed under anesthesia for the two-hour procedure, and is adamant that the fears most people hold toward bone marrow donation are unnecessary.

“Having done it, I can say it’s like if you are someone who works out and you take two to three months off of working out, and then you go back to the gym and do squats really hard one day,” Joseph Adamson said. “You’re really sore for about a week, and just like when you bend over and walk up the stairs and stuff like that, it wasn’t anything more than that.”

He recovered so quickly, in fact, that he was able to witness the end of the successful transplant, which secured his brother’s place in remission.

“About a month after the transplant they do a test to see how it went and I am engrafted one hundred percent, so all of the new stem cells my body creates are now Joe’s HLA type,” Nick Adamson said.

Nick Adamson is now back in Michigan, residing in Battle Creek and looking toward the future with long-term hopes of enrolling in a seminary.

“From everyone that I’ve talked to that has been able to do the transplant, there’s no other feeling like it, for either party,” Joseph Adamson said. “I don’t think you could ever get any closer to an individual in your lifetime other than right then when you’re literally giving someone life.”