The nuclear elephant in the room 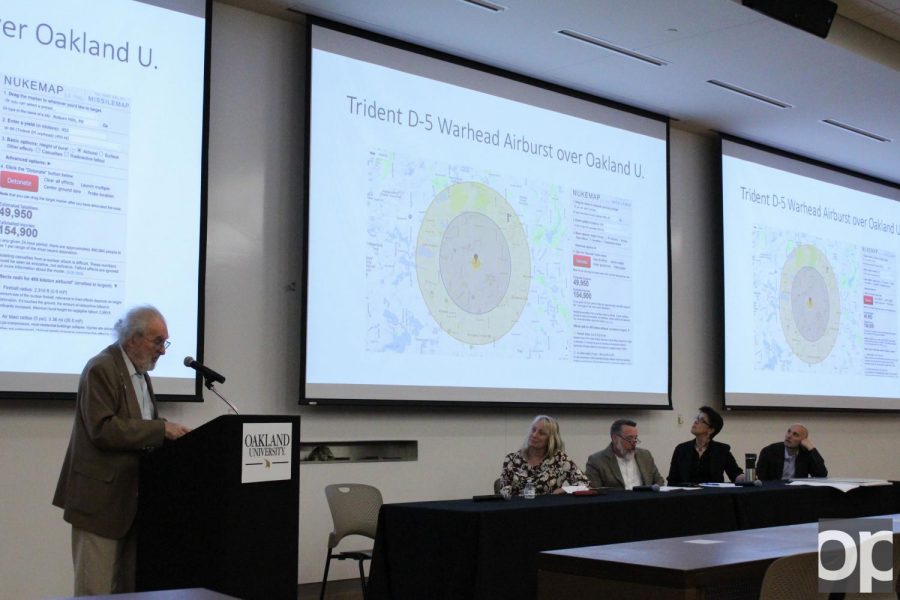 Wayne State professor Alvin M. Saperstein demonstrates what the blast radius of a nuclear bomb would look like over familiar places.

Professors gathered on Oct. 3 at Oakland University to discuss the increasing threat of nuclear weapons.

“Many of our students had no awareness of nuclear weapons,” said Dr. Anthony Perry, the director of the Democracy Institute Consortium and a political science instructor at Henry Ford College. “I grew up in an era when the cold war was raging. With the rhetoric that began to rise about using nuclear weapons as a strategic tool, we thought it was important to bring up the issue and discuss it.”

A panel of professors from Oakland, Wayne State University and Henry Ford College held the public forum in the Human Health Building to discuss the rising threat of nuclear weapons in the modern world.

“When I was a student I was very worried of if I had a future, that was the time of the cold war,” said Dr. Alvin Saperstein, professor emeritus of physics at Wayne State University. “Then the Cold War died, seemed to have died, and people stopped worrying about it. Now it’s come back. You have concerns about Korea. About the U.S. Russia Arms Race. People are now worried.”

The concerns from the Cold War have grown, if not in the minds of the population than in the physical threat and devastation that a modern nuclear bomb would cause.

According to Saperstein, a bomb like that at OU, which is in a relatively rural area, would kill nearly 50,000 people.

The ways in which a weapon such as this can be delivered is changing too. Whether by missiles, submarines or airplane, the threat has now expanded to multiple avenues.

With these growing advancements comes a worldwide focus to modernize nuclear weapons, making them more accurate and more dependable. It is important to begin the discussion about nuclear weapons and how quickly this affects the world.

“These are weapons who hit innocents, civilians, noncombatants,” Perry said. “Is this the best use of our resources for a weapon that we can never justify using? There won’t be disarmament without civilian input and participation.”

The discussion, as expressed by the panel, is directed at those who have the future in their hands.

The professionals say it’s important for students and the community to continue the discussion.

“You’ve got to accept what’s going on. When the world scares you, your first response is to respond in a negative way,” Landolt said. “You can be upset and withdraw from the scary world, or you can accept these negative realities and approach them in a positive way.”