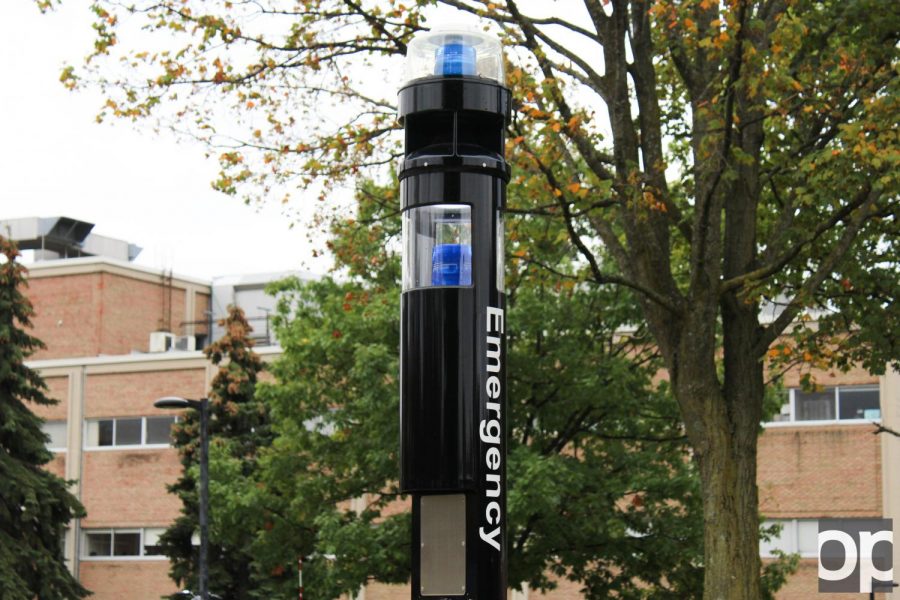 Blue light phones are scattered across campus in case of emergencies at night.

Oakland University received a report of a sexual assault that occurred at Elliott Tower past midnight on Sunday, Oct. 24. From October 2016 to this month, two sexual assaults were reported to OUPD called CSC-4. This involves unwanted touching of the victim in the chest region or of the behind.

Thirty-eight reports of assaults on campus in that time period focused on regular assault, officers getting assaulted and domestic violence. Nationally, one in three women experience sexual assault and of those women, one in four experience it at college.

Detective Shona Collins, a crime investigator of 18 years, shared a story of a student several years ago that experienced harassment from a stalker.

“This young woman was terrorized day and night,” she said. “The stalker would tell her what she was wearing that day and what she couldn’t figure out was how he was getting access to her. Finally, it was discovered that the stalker had stolen the identity of a friendly, church leader. The girl was planning on leaving and going to another state to work for this ‘leader’ which was actually her stalker. He was receiving access to her through being her Facebook friend.”

“Online dating is very prevalent, it can be a lot of fun but also very dangerous,” Collins said. “I would never invite someone back to the room after meeting for the first time. Meet them in a public place, and not just one or two meetings, but several when meeting them, also surrounded by people you know. Get to know these people, find backgrounds and try to fact check.”

Sergeant Donald Blalock said the biggest enabler of sexual assault is alcohol. He said young people are very impressionable, and some of the decisions they make aren’t great. When students fall under the influence, they are more susceptible to being taken advantage of.

“People who try to harm people use alcohol and drugs,” Lieutenant Terry Ross said. “The number one date rape drug is alcohol.”

OUPD offers tips for students to keep out of dangerous situations.

Be aware of your surroundings. Know who is around, where blue light phones are and where public areas are. Keep your head up and your body alert.
Avoid walking by yourself, especially at night. Go in groups and stick together. OUPD offers SafeWalk, where officers will watch and make sure you’re able to get to your car or dorm safely.
Trust your gut. If something doesn’t feel right, it probably isn’t. You don’t need to make excuses – better to be safe than sorry.
Be loud. Every person has a shock trigger that scare off attackers. Bad guys don’t want to be heard or seen. If students yell “no” then most likely their attackers will back off.

If students need help they can call 911 or (248) 370-3331. OUPD’s response time is typically two minutes. Students who have been sexually assaulted can seek help from the Dean of Students, OUPD, Graham Health Center and Housing. For students injured during assault, it is important to seek medical attention. All OUPD officers are trained to talk to victims who have gone through trauma.

And always know, it’s appropriate to tell someone, “no.”