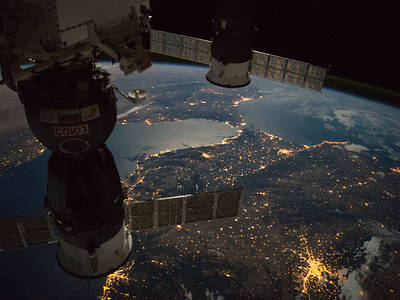 At the beginning of this month, NASA astronaut Peggy Whitson secured her place as the U.S. astronaut who has spent the most cumulative time in space, clocking in at 665 days over three long-duration missions on the International Space Station (ISS).

Currently the only working space station, the ISS has been manned continually since its creation in 2000 and is a joint collaboration between Canada, Japan, the Russian Federation, the United States and the European Space Agency.

“When they’re up there you have all these different countries and races and genders, and they’re all working together just for science,” said Cameron Hanson, an Oakland University health sciences alum with career goals of working with NASA in a medical capacity. “It really is beyond all political strife or conflict, and the only goal is to gain knowledge.”

NASA reports that the ISS, around 220 miles above the earth, circles the earth every 90 minutes, which means the six crew members get to experience 16 sunrises and sunsets each day. This places the ISS at traveling five miles every second or 17,500 miles an hour.

According to Hanson, this is the speed the ISS must go in order to prevent it from falling back to earth. Its ability to reach such a speed is routed in the lack of air restriction in space, which enables the ISS to maintain its mileage for potentially forever.

It is also important to note that, despite the common belief, Kapila Castoldi, adjunct associate professor of physics at OU stated gravity does indeed exist in space at about 90 percent capacity. It is actually the lack of air restriction that allows the crew to avoid experiencing the actual speed they are traveling.

“Imagine riding an elevator and somebody cuts that cord, then you’re in freefall and you and the elevator at that point are one,” Castoldi said. “You and the object are falling at the same speed so that’s what creates this seemingly weightless effect.”

The six crew members who are on board at any given time make up either one or two expeditions that each have individual research plans and goals.

Expedition 53, which just launched weeks ago, is focused on particle ray research as well as investigating “targeted therapies to improve muscle atrophy and explore the abilities of a new drug to accelerate bone repair.” Three of the NASA astronauts are also planning three spacewalks next month to update equipment on the outside of the station.

The ISS is the brightest object in the night sky apart from the moon, so catching a glimpse of it as it passes over is always possible if one knows where to look. NASA offers a Spot the Station option where users can even sign up to get alerts when the station will be visible in their area.

In Rochester Hills, the best chance of seeing the ISS in the next week will be on Thursday, September 28 at 8:29 p.m. when it will appear from the west for four minutes.