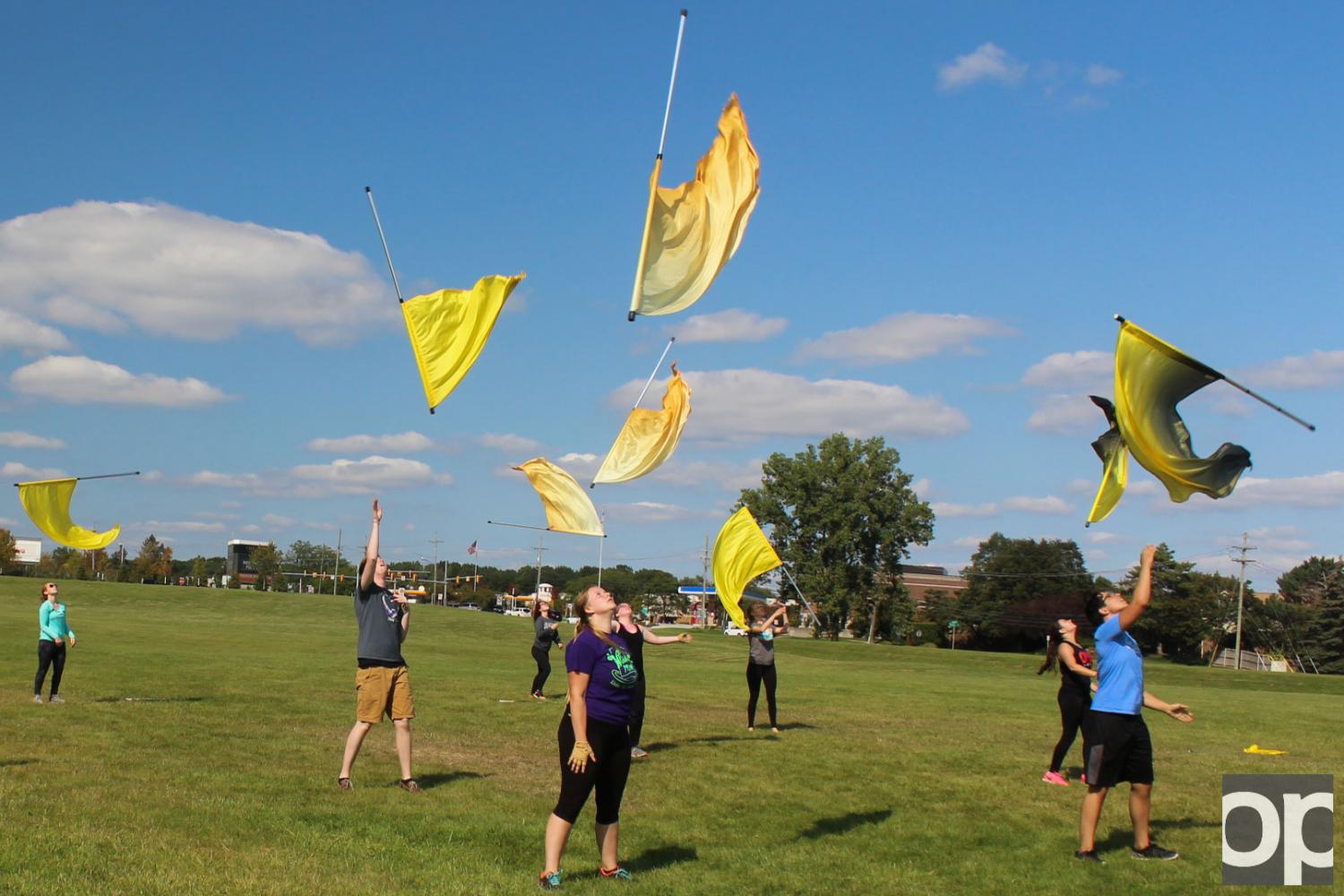 The Winter Guard Club practices for performances and experiments with their routines in the Fall.

Going into their fourth season as a club sport at Oakland University, the Winter Guard team works all year with its season broken into two parts. The first half is completely student run and there is more creative freedom with routines. In winter, the team takes on more classical routines with the help of outside choreographers to prepare for competitions leading up to the State Championship in April.

“We spin all kinds of equipment such as flags, rifles, sabres, as well as dance,” President Kristin Kaschalk said. “During the fall season, we perform at the club football games. Then during the winter season, we have our competition season where we are all indoors. We go to competitions through the Michigan Color Guard Circuit.”

Over the past three competition seasons, the Oakland University Winter Guard has made it to the State Championship every year and won every year.

“[Winning the first championship] was so crazy,” Jeffery Waters said. “It was our first year competing with Oakland, and we come out as the new guard in our division. We came out and won first place. Everyone was so shocked. It was such a thrill.”

Currently, winter guard holds 15 members and has an average of 13 members. Most members have continued on from their high school involvement with color guard. Kaschalk has a combined five years experience— including four years with Oakland’s team, and Waters has a total of eight years of experience with four years involved with Oakland’s team.

“My freshman year of high school I saw on one of my teacher’s boards saying ‘Winter Guard tryouts. Guys are welcome too.’ As soon as I tried it, I fell in love and had to continue it in college,” Waters said.

However, even if you do not have any experience with color guard or Winter Guard, all skill levels are welcomed.

“We see a handful [with little to no experience] every so often,” Kaschalk said. “We are definitely open to them as long as they are willing to work hard.”

As a whole, Winter Guard has a heavy focus on dance techniques with ballet basics and jazz walks that are combined with guard techniques. These skills translate to how members walk and run during performances, facial expressions, correct posture and spinning of equipment.

“We like to say that the muscle between the index finger and thumb is the guard muscle because you have to use it a lot to get the force for the flags, sabres, rifles or whatever you are spinning,” Waters said.

As the team at Oakland grows and progresses, the eventual goal is to participate in Winter Guard International to compete against teams from around the country and from all over the world.

As for right now, Winter Guard is continuing to prepare for its first performance of the season at the club football game on Saturday, Sept. 16.

The club will also be holding tryouts at the end of October for the winter. For more information, visit the team’s Facebook, Twitter and Instagram accounts, or GrizzOrgs.