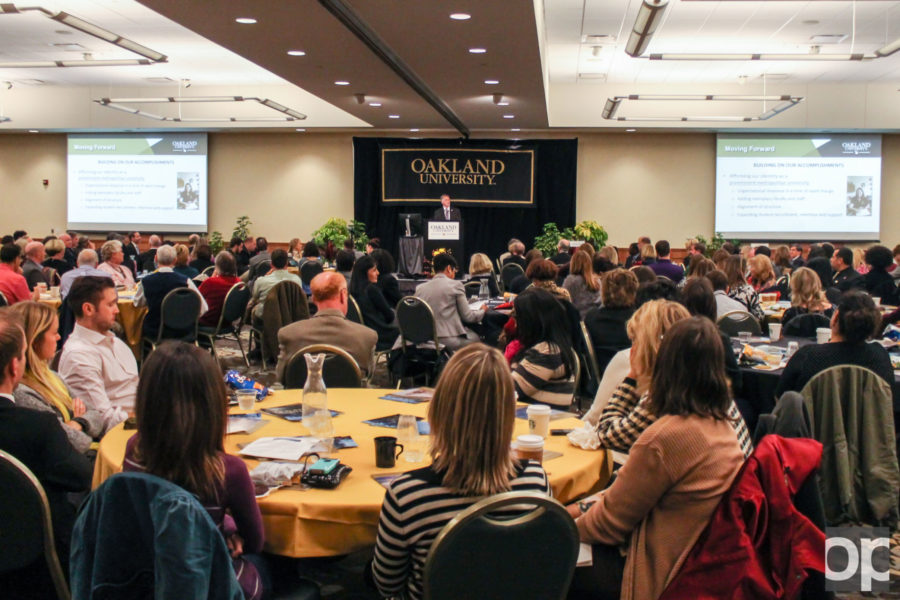 Last Wednesday, Nov.11, President Hynd spoke to students and faculty in the Banquet Rooms of the Oakland Center. Among the progress that Oakland University has made in the past few months, Hynd also spoke about the recent creation of a COO position and hire of former Board of Trustees member Scott Kunselman.

“I think that many people understand that presidents today—and I’m no exception—need to be out the door representing the university to alumni, to supporters, to opinion leaders,” Hynd said before the address,“And certainly, with our new mission statement, that is part of my job.”

More specifically, the hope for the day-to-day work once Kunselman begins as COO on Dec.1 is identified by Hynd as aiding the activity level on campus, assisting with the facilities committee and graduating successful students.

As part of his duties as COO, Kunselman is also being placed into a Strategic Action Committee by Hynd. This is done in order to bridge the gap between the Strategic Planning Committee and the actualization of the recommendations that they make.

“Mr. Kunselman has some good ideas that I think will mature in ways that we can maybe address some things that faculty and staff feel are slowing us down,” Hynd said.

Originally identified as a need for a “chief of staff” position, Hynd said that the process has been developing since January 2015. The exact position of COO came to mind when he learned of the way in which that is utilized at the University of Virginia.

According to Hynd, he and Board of Trustees chair Mark Schlussel, along with other unspecified board members, have been communicating about the idea of a COO for OU since earlier this past summer.

When asked by an audience member after his address why the role of COO has been created instead of a secretary, Hynd responded that more seniority and involvement is required than that which a secretary would provide.

In terms of the unorthodox nature of Kunselman’s hire into the position, Hynd recognizes that it is an “atypical” process not to create a public search for such an administrative role. He said that Kunselman was merely the right person for the role at the right time and for the right reason.

“I will acknowledge, because I understand their concerns, that there was not a national for this postion,” Hynd said in his address “Had Mr. Kunselman not been available, we would have done a national search.”

Kunselman said that his time serving on the Board of Trustees will benefit OU when he takes on his new role as well. He said that since he began his time on the Board, he gained a basic knowledge of the operations at OU.

In addition to assisting with Hynd’s work, Kunselman’s duties will also include representing the OU community to the Board itself.

Because of Kunselman’s membership from 2012 until October 2015, the Board’s conflict of interest policy is also a factor to consider.

According to Kunselman, the policy was not violated because of the fact that he resigned two days before he was chosen as COO. He said it would have been “inappropriate” if he had been serving as an active Board member at the time of his hire.

As mentioned above, Kunselman will begin as COO on Dec. 1. The Oakland Post plans to continue to update on the happenings and duties of this position as developments occur.