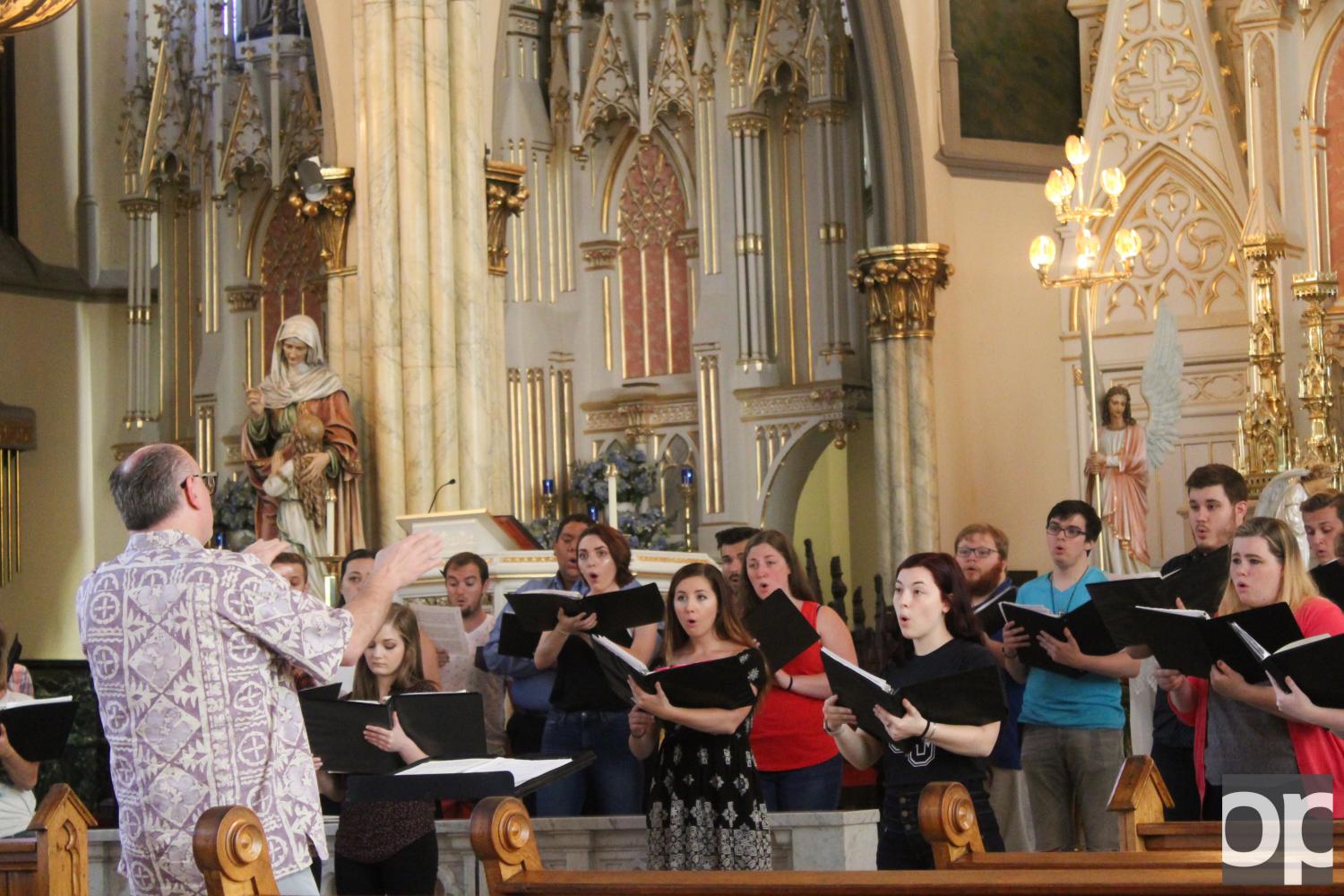 For the first time in its history, the Oakland University Choral is headed on a European tour. To say goodbye, it held a “Bon Voyage” concert in the Sweetest Heart of Mary Roman Catholic Church in Detroit on June 27.

Sweetest Heart, founded in 1889, is known as on of the Motor City’s historic churches. Like many other old churches, the inside is intricate and beautiful. When the members of the Choral first walked into the venue, they stopped dead in their tracks in awe that they would soon be performing there.

“We chose Sweetest Heart of Mary because it’s similar to many of the places we’ll be performing in Europe,” said Michael Mitchell, professor and conductor of the Choral. “It’s a large, ornate, old church with very live acoustics.  It’s a beautiful, historical space that isn’t used a lot for concerts, but the acoustics and it’s beauty make it a perfect place for a Choral concert.”

However, it is nothing like the places they will be performing in during the tour.

In Europe, the Choral will sing in venues as old as the set list. With songs dating back to the 1600’s, they are sung in the original languages like Italian and Latin. With the first stop being in Venice, Italy; the group is excited to experience the music in the places it was written for.

“We’re classical singers, so a lot of our music is written in Italian, Latin, French, Russian and German,” said Tim Brown, senior Choral member. “So the coolest part of this is that we’re going to get to sing this music where it was meant to be sung.”

One of those places is St. Mark’s Cathedral in Venice, at which the group will perform during a Sunday night Mass.

“So many famous composers wrote songs [in St. Mark’s],” senior Choral member Claire Toupin said. “We are going to sing some of those songs in the actual buildings they were written in.”

In the words of Brown, “you just can’t get that in the United States.” But the Sweetest Heart concert was about as close as one can get.

A very physical conductor, the audience could see that Mitchell wanted his group to feel like they were singing in Europe. Ranging from aggressive to somber, his leading allowed the audience to physically see the music they were hearing. With the soprano voices soaring over the bass, although much of the crowd could not understand it, the music was still beautiful.

For the Choral, knowing the meaning of the words is what helps them make it enjoyable for the audience.

“Especially during the Latin songs, I’ll actually find myself crying during performances,” Toupin said. “I’ll write the translations down, so by the time we perform I’m able to just be engulfed in the music.”

With this warm-up gig under their belts, Oakland’s resident singers feel ready to show the other side of the Atlantic their talent.

“There’s a lot of us that are looking to be professional singers down the road and some of us educators,” Brown said. “The experience we’re going to have is going to apply to a lot of different things, it’s going to be great.”