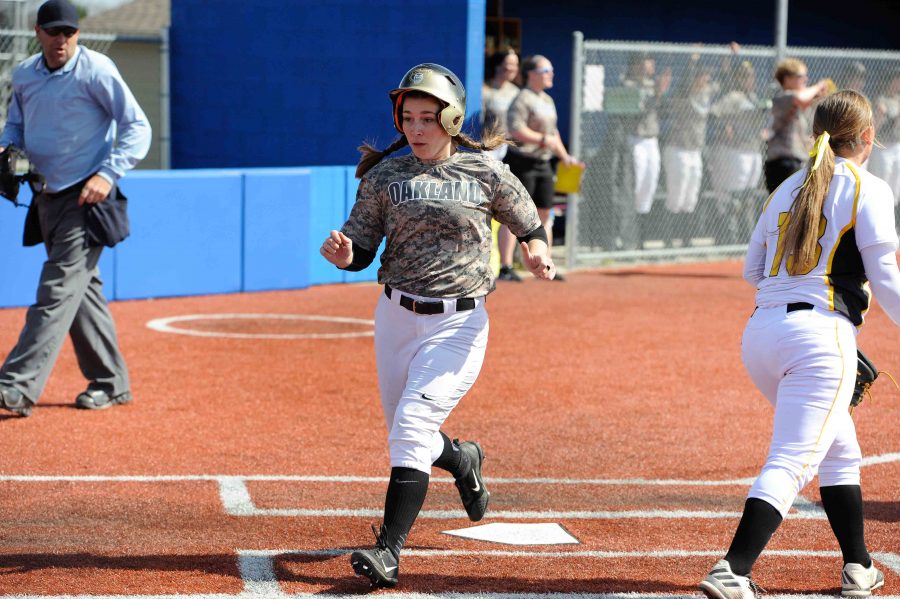 Abbey Walewski contributed a RBI single in the second inning of the third game against NKU.

After a day of unpredictable Michigan weather and a venue change, Oakland softball moved its home opener against Northern Kentucky University to Madonna University on Saturday, April 1.

Game one was followed by a double header on Sunday, April 2. The Black and Gold took the series 2-1, moving its record to 9-14.

“We just wanted to get back to playing the way we are capable of and really being aggressive at the plate,” head coach Connie Miner said. “We felt that we were taking too many pitches and looking for that perfect pitch, so we worked really hard with our swings this week to simplify things.”

In the first game, Haley Zemmer took the mound all seven innings and picked up eight strikeouts along with the win. At the plate, Lauren Mead lifted Oakland to a 2-0 lead in the second inning, with Jamie Squires also adding two runs in the third inning.

With the score at 4-0, NKU put up two runs in the top of the sixth inning to shorten the gap. However, Mead tacked on three more runs with her first homerun of the season in the bottom of the sixth to push the score to 7-2. Oakland held on to the lead.

“The offense attacked the ball, and the energy was outstanding,” Miner said. “We had a great series of hitting and driving the ball well. Our pitchers did a nice job for us too. We played really good defense overall.”

In the second game of the series, Erin Kownacki started in the circle and picked up four strikeouts in her complete-game win. Mikayela Marciniak led the offense with four RBIs from a triple and a homerun.

Devon Smith and Brittney Miller also added one run apiece. The seventh Oakland run was attributed to an NKU error.

Despite NKU having scored first in the top of the first inning and having more hits throughout the game, the Golden Grizzlies came out on top 7-3.

“It was great to know I hit a three-run home run, but it was all for the team,” Marciniak said. “I knew it would help pick everyone up and get back in the game, as well as getting ready for the next one.”

Zemmer started on the mound in the second game of the Sunday doubleheader. She recorded six strikeouts before being relieved by Kaley Waalkes in the fifth inning.

Devon Smith got the Black and Gold on the board first in the first inning with a double that scored Marciniak. Abbey Walewski and Miller each contributed an RBI single in the second and fifth inning, respectively.

NKU quickly tied up the game in the third inning before widening the gap in the top of the fifth with three runs. Despite a seventh inning rally, Oakland dropped the third game of the series 5-3.

“When we get into the later innings, I think the most important part is to make sure your at-bat is a quality at-bat,” Marciniak said. “You only get 21 outs in a game, so you just have to make sure your out counts. I always think that spring training and early season games are good for getting us ready for conference play. Once we hit conference play, that’s when every out and every game matters.”

Oakland is now in the midst of a three-game series against Cleveland State at home. Oakland picked up two wins in the doubleheader on April 4 (5-1, 14-1), and the last game of the series is scheduled for 12 p.m. on April 5.