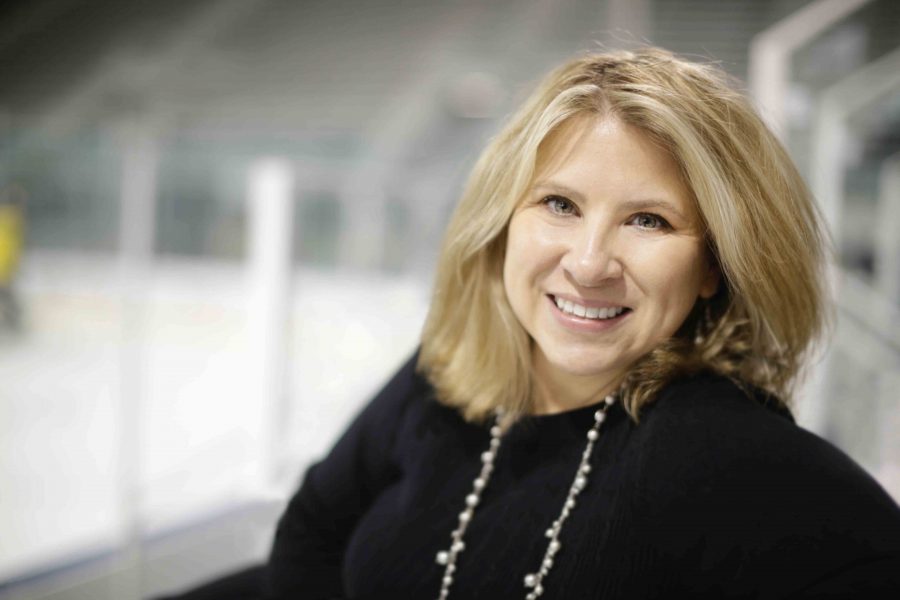 Journalism alumna Joanne Gerstner is the recipient of the Headliner Award from The Association for Women in Communications Detroit Chapter.

“The Headliner Award salutes the outstanding personal and professional achievements of an AWC Detroit Chapter member,” the association’s website said.

Gerstner was shocked and flattered when she found out. She knows that someone from the association had to nominate her for the award, but she doesn’t know who did.

“I was very, very moved when I found out,” she said.

Gerstner’s achievements as an award-winning sports journalist are undeniable. She has covered the Olympics, men’s and women’s soccer World Cups, and NBA and NCAA championships, according the association’s website.

She is also sports journalist at residence in Michigan State University’s School of Journalism.

Her work has appeared in The New York Times, USA Today, ESPN.com, The Detroit News, The Cincinnati Enquirer and PGA Magazine, among others, according to her bio page on MSU’s website.

Despite all of her accomplishments, Gerstner said it is most rewarding when her work helps someone.

She recently partnered with Jeffrey Kutcher, a neurologist specializing in sports neurology, to complete the book “Back in the Game: Why Concussion Doesn’t Have to End Your Athletic Career.” Gerstner said concussions are common and misunderstood injuries. The book, published in 2016, aims to provide a real-world discussion about them for parents, coaches and youth athletes.

Some of Gerstner’s other impactful work includes an award-winning article published in The Detroit News about fan safety at sporting events and an article in USA Today about a charity started by a former athlete. After the publication of the latter, donations for the charity increased.

“People care,” Gerstner said. “People want to help. So, if you can bring them into someone else’s world, it means a lot.”

Gerstner also helps aspiring journalists when she teaches at MSU and speaks about her book and other topics. She called this work a “gift and responsibility.”

Another mission for Gerstner is advocating for women in sports journalism. She is active in The Association for Women in Sports Media and has faced adversity because she is a female sports journalist.

The few women in sports media don’t tend to get higher-up positions, such as editor or analyst, and many don’t do play-by-play, she said.

“We’re in the room, but we’re not influential, and we’re not making decisions,” she said.

Gerstner said it is necessary to fight this trend and said that in the U.S., women are still a minority in the field.

“Women are just as passionate and knowledgeable about sports as men,” she said.

While working weekends and holidays as a sports journalist can be stressful, Gerstner stays in the field because there’s always something new. Sporting events can have unexpected outcomes, and there are some interesting characters in sports, she said. She also enjoys traveling.

Gerstner will speak in Austin, Texas; Berlin and Chicago in the near future and hopes to go to the Ed Sheeran concert at the Little Caesars Arena.

Gerstner will receive her award at the 2017 Matrix Awards at 5:30 p.m. on Thursday, May 18 at Plum Hollow Country Club in Southfield. Tickets are available through The Association for Women in Communications Detroit Chapter website.