How to survive an active shooter situation 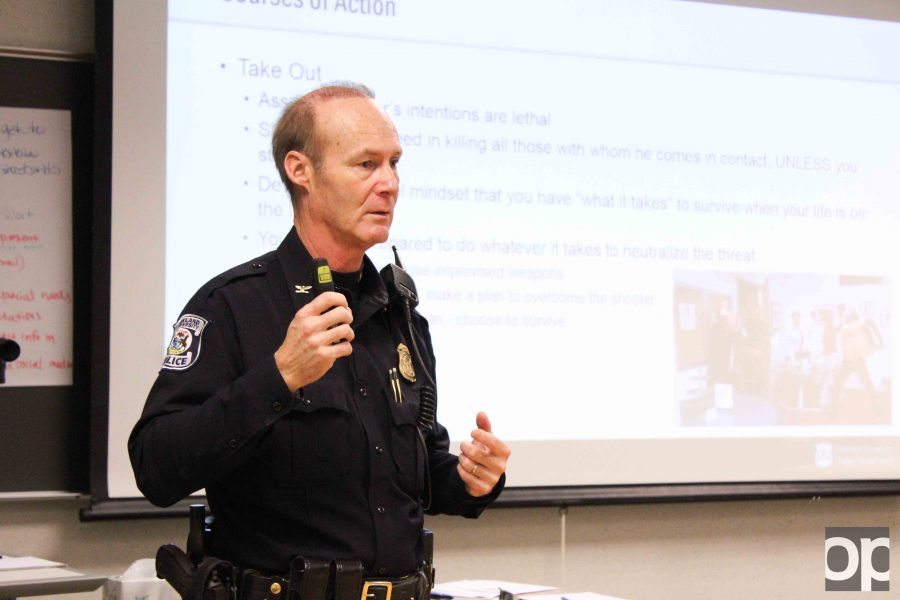 The odds of being involved in an on-campus shooting situation are similar to your chances of being struck by lightning, according to the video “Shots Fired on Campus: When Lightning Strikes.”

However, this is no reason to dismiss precaution. Oakland University Police Department Chief of Police Mark Gordon delivered a lecture to OU professors on how to handle and survive such an incident on Tuesday, March 7 from 12-1:15 p.m. in 200A Elliott Hall.

He emphasized that it is important to first differentiate a hostage situation from an active shooter incident. In a hostage situation, a person’s best chance of survival is to remain patient and compliant while waiting for authorities to handle it. If a shot is fired, everything changes.

The active shooter presentation included three survival strategies, which are interchangeable and can be applied to any environment, although the lecture centered on college campuses.

The first option is to look for an escape.

Gordon said people tend to understand gunshots from video games and TV, leaving real shots to sound almost artificial. Therefore, it is necessary in such a situation to trust your instincts and not wait for someone else to validate a popping sound.

If the shooter is already in the area but has not seen you, the next option is to hide.

If possible, avoid places with only one exit or that could restrict movement.

Lock the door, turn off the lights, and silently move furniture in front of the door if there’s time.

It’s often instinct for groups of people to huddle together when hiding, but if the shooter makes it into the room, a group is a large, unmoving target. Spread out, and stay low to the ground in case the person fires through the drywall.

If the shooter makes it into your hiding space, be prepared to fight. Assume the intentions are lethal and convince yourself that you have what it takes to survive.

As soon as the shooter enters the room, everyone in the room should throw heavy items at the person, such as textbooks, backpacks or chairs.

This may sound ineffective against a gun, but the idea is to overwhelm the shooter physically and mentally. It’s a natural reaction for shooters to throw their arms up and therefore pause shooting.

The group should then run at the shooter as a group. Remember, there is one shooter and likely at least 20 of you.

The objective is to keep the shooter pinned to the ground, take the gun, and wait for the police.

If authorities get to you before the shooter is caught, do not to run at them. Stay calm and show your hands. There is no way for them to know immediately that you are not the threat.

Quickly tell them any information you have, and don’t expect them to stay with you. Their job is to handle the threat.

Gordon said not to let anyone into the room if they claim to be police due to the fact that campus police have keys to every room and could simply let themselves in.

He also warned not to react to a fire alarm during an active shooter situation unless you see fire or smoke because the shooter could be trying to flush people out of a building.

“We deny ourselves the opportunity to create a plan because we deny the fact that it could happen to us,” Gordon said. “You cannot create a life-saving strategy during a life-threatening incident.”

Comparable reactions of people who are prepared for such a situation and those who are not.