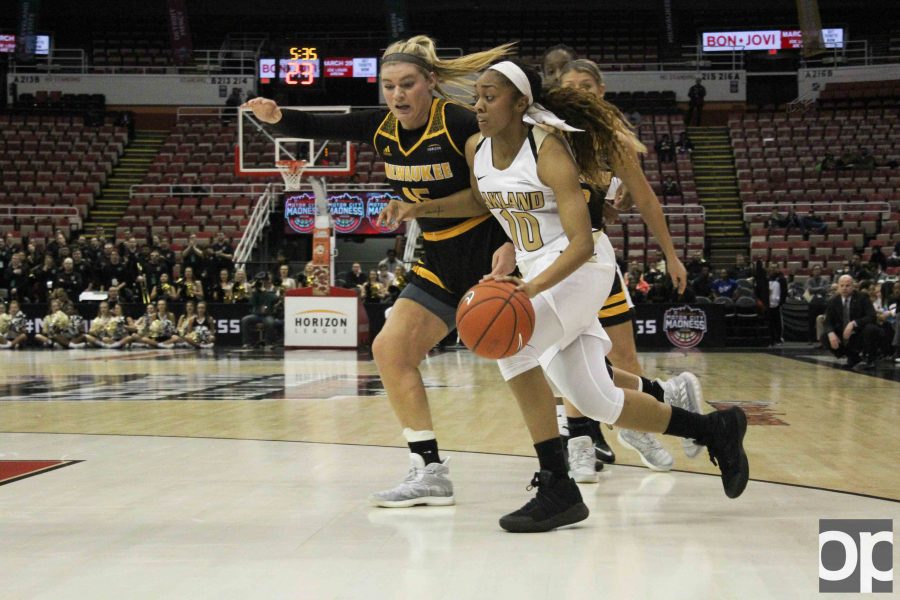 Taylor Jones led the Oakland women's basketball team with 16 points in the game against Milwaukee at the Joe Louis Arena Sunday, March 5.

In the women’s basketball quarterfinal of Motor City Madness, the Golden Grizzlies (18-12, 12-6 HL) battled the University of Wisconsin-Milwaukee Panthers (20-10, 11-7 HL) and lost 82-60 on Sunday, March 5. No. 4 Oakland was looking for a third win against No. 5 Milwaukee after defeating the team twice earlier this season.

“I’m proud of our team and how they competed,” said Oakland head coach Jeff Tungate during the postgame press conference. “We’ve overcome a lot of adversity throughout the year . . . It’s a tough loss. It’s hard to beat a good team three times . . . At the end of the day, we’ve just got to get a little bit tougher.”

Redshirt senior Hannah Little decided to play in the game despite having a broken hand. She was scheduled to have hand surgery earlier this week, but decided against it because she would not have been allowed to play in the quarterfinal.

“I wasn’t really thinking about [my hand] much,” Little said. “I didn’t feel much pain. My trainer did a good job taping it.”

Little averages 11.6 rebounds per game and is ranked fourth in the nation for rebounding. At halftime on Sunday, however, she had zero rebounds. Tungate believed that it was not her hand that kept her from going for rebounds, but worrying about her hand.

“I mean, what an incredible story,” Tungate said. “How many people are going to play with a broken hand, tape it up and say, ‘Let’s go.’ Then in the second half, she just came out and said, ‘Forget the hand, we’re winning, let’s play.’ I just think the toughness of that kid is unbelievable. I don’t know very many people in the country that would do what she attempted to do today, and I’m just really, really proud of her.”

“I feel like it was a good atmosphere,” said redshirt junior Sha’Keya Graves. “It feels good to be down here as one entity with the men as well.”

Oakland’s lead scorer, with 16 points, was sophomore Taylor Jones. Jones was 5-for-15 from the field and 3-for-6 from beyond the arc. Graves followed Jones with 15 points and went 3-for-6 from the 3-point line.

In order to prepare for the game, Milwaukee focused on working more as a team and preventing Oakland from scoring off turnovers.

“When we drew this draw coming into the tournament, as a coach, to be honest with you, I was a little nervous,” said Milwaukee head coach Kyle Rechlicz in the postgame press conference. “I think that Oakland is an incredibly talented team . . . and with this game, I knew we had to get back on transition. We knew we had to take care of the basketball. The goals throughout this game were to limit [Oakland’s] transition scores and to put ourselves in a position where they won’t score off our turnovers.”

The Panthers’ leading scorer was junior Jenny Linder with 19 points. She led both teams in points, going 7-for-11 from the field and 5-for-5 from the free-throw line, and grabbed a total of 14 rebounds.

“If we play as a team and we’re not selfish or anything, we’re really hard to beat,” Linder said. “We have a lot of scoring weapons, and our defense really stepped up tonight. So I think that coming together as one tonight really showed.”