Student-athletes excel on both sides of the hyphen 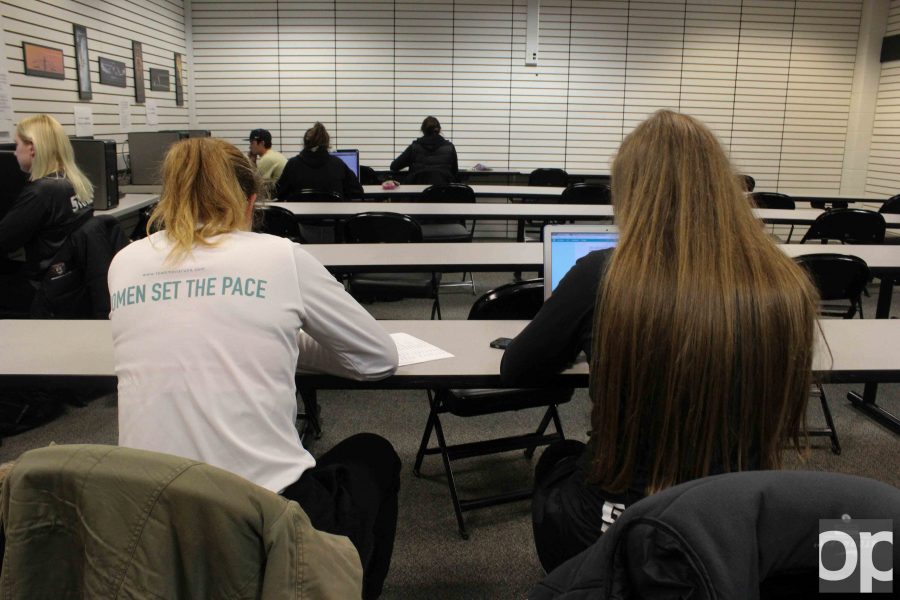 Student-athletes use "The Grizz" in the O'rena as a study room.

As winter sports come to a close, many athletes show that they are competitors both on and off the field. At the end of February, the Horizon League announced the Academic All-League Teams for basketball, indoor track and field, and swimming and diving. A total of 13 Oakland men and women were named to the All-Academic Teams for their respective sports.

To be eligible for All-Academic honors, an athlete must meet three criteria. They must participate in at least one of the league’s 19 sports during the current season, have completed at least 24 credits as a full-time student at the same member institution and have a cumulative grade point average of at least 3.2.

If an athlete meets these criteria, a faculty athletics representative from each of the Horizon League schools casts a ballot to decide who will be awarded Academic All-League Honors.

Since joining the Horizon League in the 2013-2014 school year, Oakland has been a top school for student-athletes earning academic recognition.

Holly Kerstner, senior associate athletic director for Student-Athlete Services, has helped Oakland athletes meet the athletic department’s goal of an overall 3.0 GPA. In fall 2016, the athletes had an overall GPA of 3.27, surpassing the department best of 3.24 in fall 2015.

“We had a really good group of athletes,” Kerstner said. “You never know what the freshmen are going to bring to the table. Those are the ones that haven’t established a GPA, and we had a couple of freshmen with 4.0s. These are 4.0 kids that are in calculus and chemistry. This was a really strong freshman class.”

Dorsey-Walker has long excelled in the classroom, graduating as valedictorian of Pershing High School in Detroit. He holds a 3.32 GPA in integrative studies.

Women’s basketball head coach Jeff Tungate was very impressed that two of his players were named to the five-member team.

“This shows Oakland’s commitment to developing and recruiting true student-athletes,” Tungate said. “[Dodd] and [Gleason] prove you can be successful both on the court and in the classroom. They are great role models for student-athletes everywhere. I’m really proud of them and their great accomplishment.”

Gleason holds a 3.88 GPA in integrative studies, while Dodd holds a nearly perfect 3.93 in health sciences.

Indoor track and field’s Miranda Haas, George O’Connor and Tyler Sirut were also honored. A fifth-year senior, Haas currently holds a 3.91 GPA in biology. O’Connor boasts a 3.54 in communication, while Sirut holds a 3.66 in his first year of nursing school.

“I’m just so proud of them because I think that it takes a lot to be dedicated in your sport, and it takes a lot to be working so hard academically,” Kerstner said. “There’s certainly times when the student-athletes could get focused simply just on their sports, especially when they’re hitting their junior and senior years . . . These athletes are showing that we are competitive all around.”