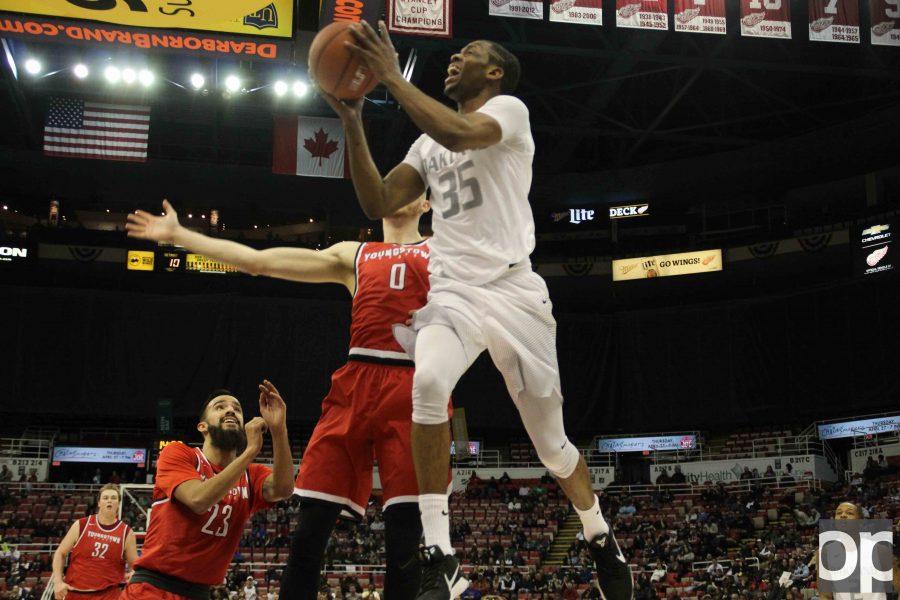 The Golden Grizzlies fell to the Penguins 81-80 in the Motor City Madness quarterfinals on March 4 at the Joe Louis Arena.

The Golden Grizzlies fell to the Youngstown State Penguins 81-80 in the quarterfinals of Motor City Madness on March 4 in the Joe Louis Arena, despite having beat YSU by 29 points on Feb. 21.

The Golden Grizzlies never controlled the game as would be expected of a first seed playing a ninth seed.

The game saw 19 lead changes and came down to the final 30 seconds. Oakland had the ball under the Youngstown State basket with 28 seconds to go.

Under heavy pressure, Sherron Dorsey-Walker failed on his attempt to inbound the ball to Martez Walker, throwing the ball out of bounds and giving possession back to the Penguins.

Cameron Morse was the obvious go-to player for YSU’s final shot as the clock wound down. Morse scored 34 points throughout the game and was shooting 12-for-24 from the field at the time.

Morse got two attempts at regaining the lead for his team, rebounding his first shot, only to miss his second.

With Oakland still up by 1, Jalen Hayes went to the line to shoot one-and-one after being fouled. He missed his first shot, giving YSU the ball with 11 seconds to go.

Having missed his last two attempts, Morse had the ball at the 3-point line. He faked a shot, sending the ball to Youngstown’s big, Jordan Kaufman. A defensive mistake by Isaiah Brock left Kaufman alone under the basket for the game-winning shot.

“A freshman made a mistake,” head coach Greg Kampe said in the postgame press conference. “Our big is supposed to stay at the front of the rim and protect it.”

Kampe explained his decision not to use his final timeout with under four seconds left. In retrospect, he sees he could’ve used that opportunity to remind his players of their positional responsibilities, but he didn’t want to give Youngstown a chance to set up a play.

“We definitely thought he was taking that last shot,” Hayes said of Morse. “He lit us up all game . . . He made a great pass. Give him credit.”

The Penguins had led by as many as 10 in the first half. In the last five minutes of the first half, the Golden Grizzlies were able to score 15 to the Penguins’ 7, giving Oakland a 1-point lead at the half.

The second half saw the lead change 11 times, as both teams battled for the win and the right to continue on to the semifinals. Hayes led Oakland with 27 points, adding 13 rebounds. Walker added 22 points, and the team’s lone senior Dorsey-Walker scored 16.

Youngstown State’s top performers were Morse, who ended shooting 12-for-28, and Kaufman, who finished with 22 points, two of which may be the highlight of his basketball career.

“Honestly, this still doesn’t feel real,” Hayes said in the postgame press conference. “We worked all season for this moment today, and we came up short.”

Kampe shared the pain with his players.

With Oakland’s regular season championship came an automatic bid to the NIT postseason tournament. Oakland will find out its seed and first game shortly after the NCAA selection show on March 12.