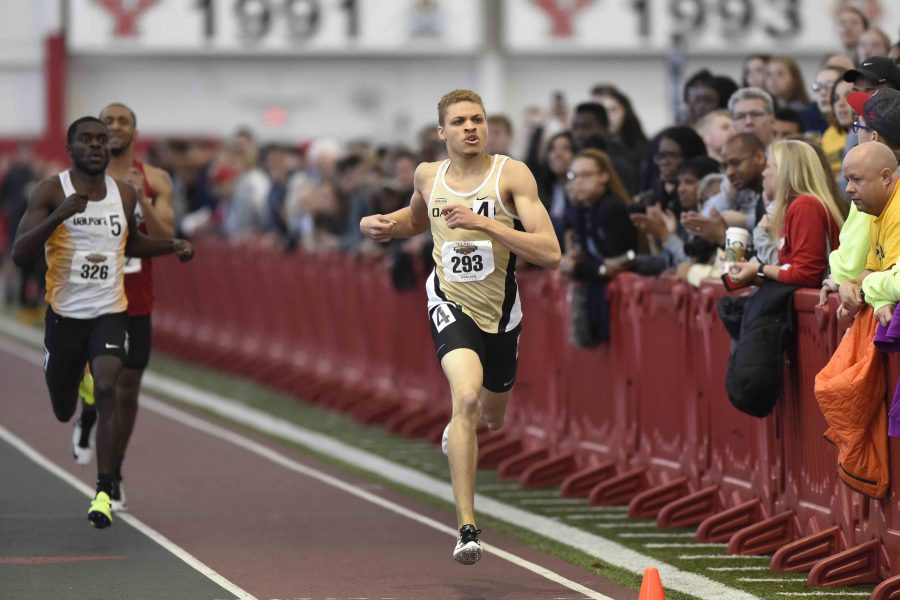 The men’s team’s 157 points and second-place finish is the highest league finish in outdoor or indoor season in program history.

“I’m really happy for the guys,” head coach Paul Rice said in a GrizzVision interview. “We’ve never been in the top two at an indoor or outdoor championship in track and field since we started our program . . . it’s a great accomplishment for us.”

On day one, the Golden Grizzlies had four first-place finishes, along with three record-breaking performances.

Dana Tessmer took home the gold in pole vaulting, with a mark of 12 feet, 4.5 inches, breaking her own school record. Oakland won first in both the men’s and women’s 5000m.

The women’s distance relay team of Rachel Levy, Odette Ingall, Kailey Weingartz and Ashley Burr won first place with a time of 12:18.42 to round out the day’s winnings.

As for record-breaking performances, Brandon Davis broke his own school record in long jump with a mark of 23 feet, 8 inches, good for second place, while Aaron Davis set a second record in the preliminaries of the 200m dash at 21.59 seconds.

For the men, Bryce Stroede took home first place in the mile with 4:09.23. This marks the senior’s third win in the mile at the Horizon League Indoor Track & Field Championships of his career.

“There were 10 guys in the field, and I sat at about sixth or seventh the whole race,” Stroede said. “Today . . . I timed it out right. With about 150 to go, I turned on the burners and had some fun with it. That’s the end of the day you want to have some fun with.”

Austin Dawn’s time of 1:55.68 was good to take home gold in the 800m, and Corey Goodloe took first in the 400m dash with 48.84. The win for Goodloe was the sophomore’s first indoor title of his career.

“I made sure I was going to dig deep,” Goodloe said. “I had to stay confident, and I had to trust my fitness, and my teammates talked to me, and they said, ‘Whatever you do, man, just go out there and have fun.’ And that’s what I did.”

Both team’s 4×400 relays won gold and set new records in the event. For the women, it was Andrea Koenigsknecht, Stanley, Sydney Sterling and Chanel Gardner with a time of 3:52.28.

For the men, Zach Joyce, Tré Brown, Austin Davis and Goodloe won the event with 3:17.08.

More record breakers included Zach Stadnika, who broke his own school record and placed second in the heptathlon with 5,040 points, and Nick Girodat, who broke a school record in the 200m with 21.51. Girodat finished second, just a hundredth of a second behind the winner.

The Golden Grizzlies open up the outdoor season on March 24-25 at the Raleigh Relays and the Tennessee Invite.