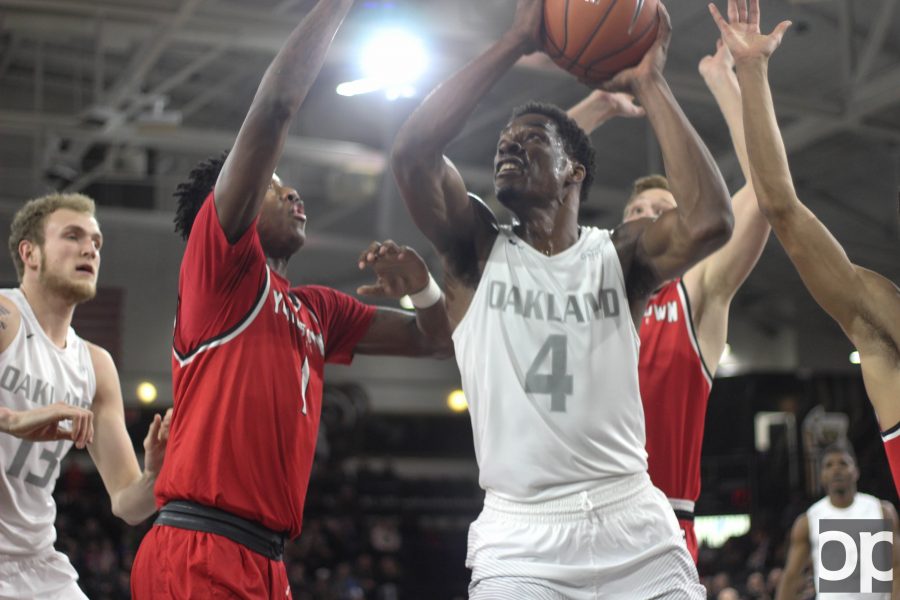 In the last home game of the season, Jalen Hayes added 24 points to lead the Golden Grizzlies to their 101-72 win over Youngstown State on Tuesday, Feb. 21 at the O'rena.

It was an emotional night for the men’s basketball team as it honored senior Sherron Dorsey-Walker with a 101-72 win over Youngstown State University (11-19, 5-12 HL) in its Senior Night game on Tuesday, Feb. 21. The win against Youngstown marked Oakland’s 45th win since Dorsey-Walker has been on the team.

In front of a crowd of 2,553, Oakland broke the record for single season attendance at the O’rena with 48,886 people.

“Very pleased that we were able to get Sherron out that way,” head coach Greg Kampe said. “[He’s] as good a person that’s ever come through here. Just a super, super young man and deserves all the accolades he’s getting. To be able to win by a large margin so you can manipulate the game, I thought that was really good. I was really happy.”

Redshirt junior Jalen Hayes was 11-for-15 from the field and led the Black and Gold with 24 points and 13 rebounds. Following Hayes was redshirt junior Martez Walker, shooting six-for-10 from the floor and six-for-six from the free-throw line. Walker scored 19 points and earned a career-high six assists.

“[Youngstown] always plays hard against us,” Walker said. “Everybody is going to try and play hard against us when we’re one and two seed now. Every game we come out, everybody is trying to beat us to stop that streak we’ve got going on here, so we just have to keep it up and keep our heads.”

Senior Night was all about Dorsey-Walker, this year’s only graduating senior. His farewell speech in the middle of the court got emotional as he brought up his teammates.

“I want to thank my teammates and coaching staff, I love all y’all goofballs,” Dorsey-Walker said. “I might have some things going on in my life, but every time I come here and I see you guys, it’s a great feeling. Man, I’m getting emotional.”

Walker attended Pershing High School and grew up with Dorsey-Walker. To him, the win over Youngstown comes second to honoring Dorsey-Walker.

“It’s Sherron’s day, my oldest brother,” Walker said. “I went to high school with him, played basketball with him, I just grew up around him all my life. It was his day, but we just tried to come out here and get the job done.”

Following his graduation, Dorsey-Walker plans on connecting with an agent and exploring a career in professional basketball. After playing professionally, he plans on coming back to Oakland to get his master’s degree in human resource development.

“I’m going to be a Golden Grizzly for life,” he said.

Oakland takes to the road to face the University of Wisconsin-Green Bay Phoenix at 7 p.m. on Friday, Feb. 24.