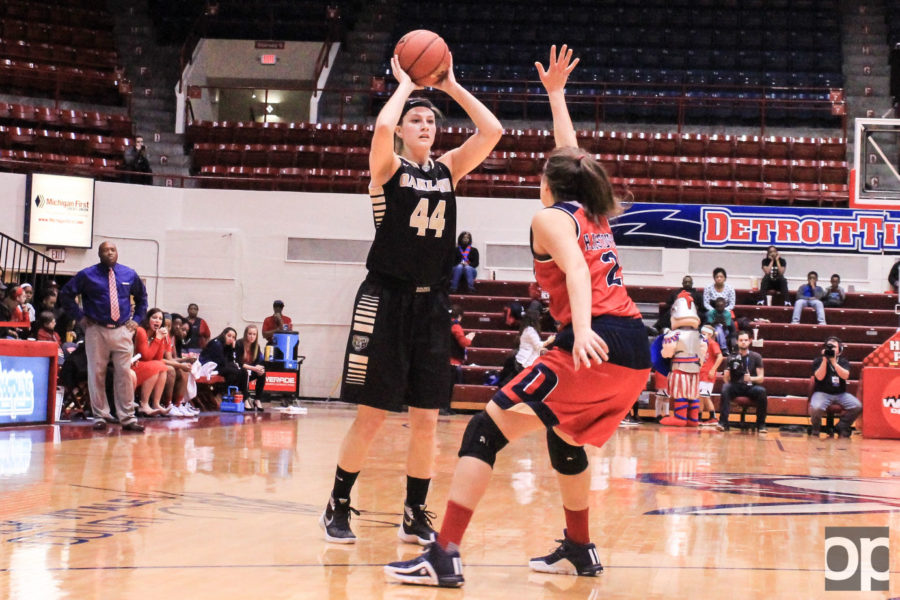 The collegiate sports community knows the name Olivia Nash, and it is no wonder why. Through January 11-18, the senior women’s basketball forward averaged 26 points, 14 rebounds and 2.5 assists per game. Last season, she was ranked within the top-15 for points (13 per game) and rebounds (8.1) in the Horizon League.  And Nash isn’t showing any signs of slowing down.

She achieved a career-high 28 points in a fast-paced 77-72 home loss to Wright State University on Jan. 18. Nash managed 14 rebounds and got her sixth double-double of the season.

Head Coach Jeff Tungate said Nash is difficult to guard because she can score inside and outside. But Nash does not claim that to be the sole reason for her success.  She gives credit to her entire team and coaching staff.

“If it was not for them I would not be scoring and playing the way I am.  They push me through thick and thin,” Nash said.

“The coaching staff are always encouraging me and making sure that I reach my full potential and finish out my senior year strong.”

Nash plans to pursue basketball after graduation this spring. Tungate has big expectations for the highly-skilled forward.

“She will be able to accomplish whatever she wants in life, but I think she wants to have a chance to play professionally,” Tungate said. “I think she is going to have the opportunity to do that, especially the way she is playing this year.”

In her final season with the Golden Grizzlies, Nash faces the bittersweet end of her college career and the exciting start of her career after college.  However, the season is not over, and Nash has a goal set on the horizon.

Nash said no matchup will cause her to give up.

“I always want to go out and treat every game like it is my last,” she said.

Until then, the busy basketball player balances her final semester with team travel and conquering her place in Oakland’s history.  But it is safe to say this is not the last season for Olivia Nash.