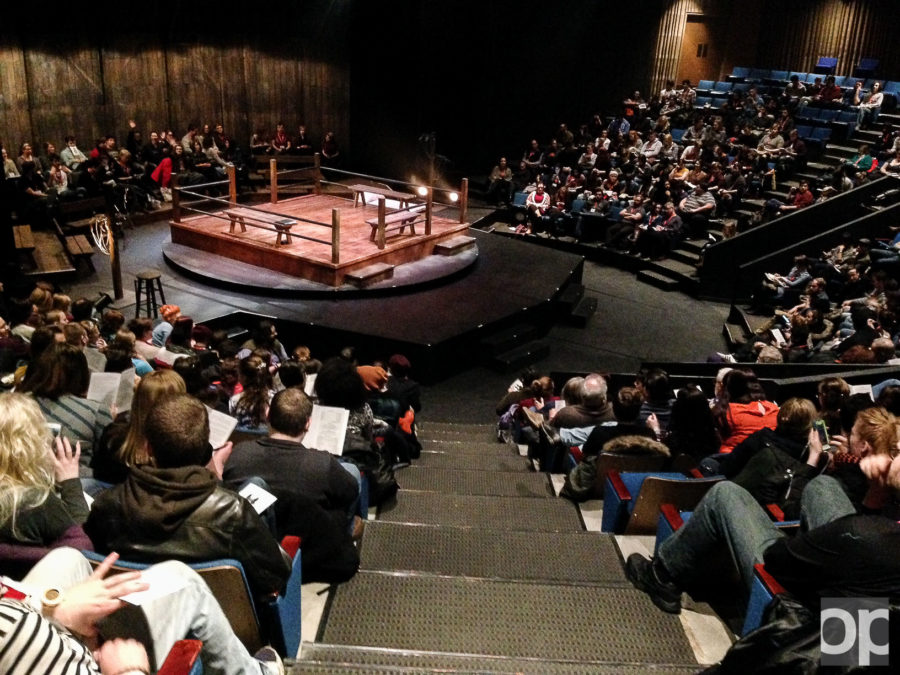 About 80 students from the OU theatre department went to Milwaukee to perform Equus in the American College Theatre Festival from Jan. 5-9.

The theatre department brought around 80 students to Milwaukee to perform Equus in the American College Theatre Festival that ran from Jan. 5-9.

Thomas Suda, the director, said that the six-day festival happens every year.  Oakland University, though, only applies about every three years to have a performance in the festival.

“Performances used to compete against one another to perform at the Kennedy Center,” Suda said. “But the cost to send full performances across the country again just proved to be too much.”

Equus was performed at the festival, but there is no competition for full performances like Equus.

To take the cast, crew and set pieces of Equus to Milwaukee, Suda said that it cost upwards of $22,000. This figure included the other 40 students who were part of the theatre program who attended the festival as well.

Ian Turnwald, student performer who played Alan Strang in the production, explained the process that theatre students went through in order to attend the trip.

“Throughout the year, students can be ushers or sell concessions at various performances to gain up to 5 points,” he said. “Each point is worth an hour and those 5 points give you the maximum discount on the trip.”

Despite Equus not being a part of a competition, some of the 80 students who attended the trip did compete in individual fields, such as set design and musical theatre.

Oakland University has been attending the festival for 25 years according to Suda.

“Oakland University continues to be one of the most represented schools present (at the festival),” he said.

During the six-day trip, students had the opportunity to put on two performances of Equus, as well as see other universities’ productions.  They were also able take part in classes that professors from other universities taught for the festival.

Equus was performed twice over the course of the festival on two separate days. According to Turnwald, his favorite part of the festival was seeing the audience engaged in each performance.

“It’s sort of different when you perform for a group of people who really love theatre,” Turnwald said. “The people who were in the audience really wanted to be there. There was no one there because their family was in it or it was required for a class, I doubt there was a phone on in the entire audience.”

Suda said that people were lined up waiting 45 minutes before showtime.

“It was extremely well received,” said Suda, “it was a full 600 seat auditorium for each performance”.

Oakland stood out in this production because the entirety of it was put together by undergraduate students, Suda explained.

This semester, students can look forward to the theatre department putting on productions of Assassins, originally composed by Steven Soundheim, Adventures of Pinocchio and other performances listed at oakland.edu/mtd/theatre/productions/.