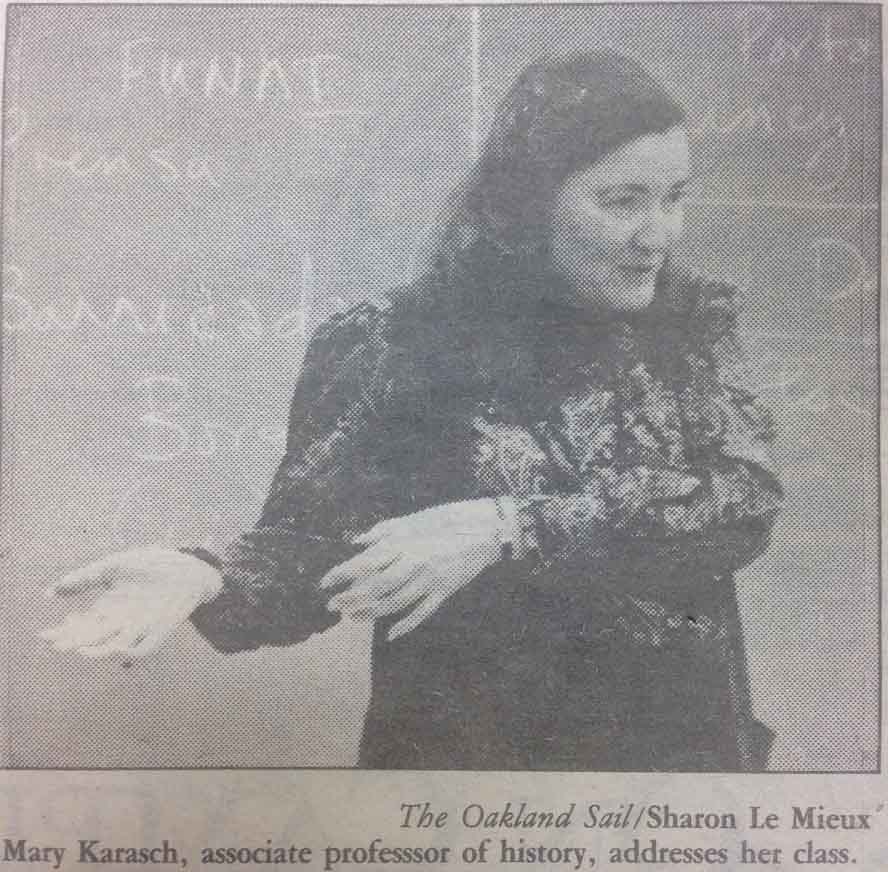 Karasch speaking to her class following allegations of classroom bias.

In October 1985, Mary Karasch, associate professor of history at Oakland University, was accused of expressing liberal bias in the classroom.

A third-party company called Accuracy in Academia sent out a news release announcing its newsletter, leading students from 110 colleges around the country to call in complaints about professors being too liberal, too conservative or even too Marxist.

Once a student called in a complaint, the organization would call the professor to verify information given to them. Then, Accuracy in Academia would publish the professor’s name in a monthly newsletter sent to colleges nationwide. In addition, the newsletter would be sent to private contributors, student informants and the media.

Les Csorba, the director of Accuracy in Academia, said that the goal was not for accused professors to be fired or disciplined, but rather the purpose was to “shed some light on biases.”

Then dean of OU’s College of Arts and Sciences, Brian Copenhaver, was opposed to the project.

Csorba advised Karasch to present information from government reports, since he felt her reading list was too one-sided.

“If she doesn’t, I’ll be back in touch with her,” Csorba said.

According to its website, Accuracy in Academia is a nonprofit group in Washington D.C. that “publicizes political bias in education.”

In addition, the organization states that its articles focus on the use of classroom resources to persuade students, discrimination against students based on political or academic beliefs and campus violations of free speech.

Until the Oct. 21, 1985, issue of The Oakland Sail in which the news of Accuracy in Academia’s allegations was released, Karasch had no idea she was even being accused.

“In previous classes, people always felt free to express opinions that differed from mine,” she said.

She said that students had commented on past evaluations that she was biased, but said that answers on exams allowed students to express converse views.

In the late 1960s, Karasch had lived in Brazil, where there were protests against the dictatorship.

“I can see, having lived there, what it (monitoring) can lead to,” she said.

She cited an incident at the University of Brasila, where bugging devices were found in a classroom, and students destroyed them.

“When they begin to control what is said, surveillance is next,” she said.