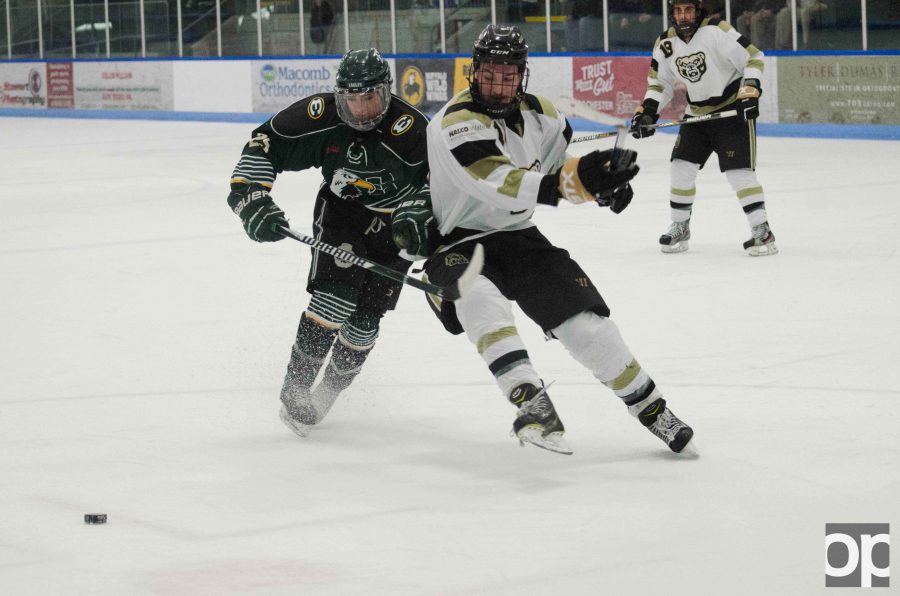 Oakland’s Division I club hockey team battled it out against Eastern Michigan University at the Onyx Ice Arena, but eventually lost 4-2.

If the Red Wings have left you disheartened, there’s still a team out there that is sure to entertain – Oakland University’s men’s Division I club hockey. With their season nearing its end, the Golden Grizzlies took on Eastern Michigan on Saturday, Feb. 4, hoping to redeem themselves after a tough overtime loss the previous night.

This time around, Oakland had the home advantage as it prepared to confront Eastern Michigan on the rink of the Onyx Ice Arena in Rochester.

Despite two significant rallies coordinated by Oakland, the Golden Grizzlies fell to the Eagles 4-2. The final nail in Oakland’s coffin came when Eastern scored the final goal on an open net with just seconds remaining. The defeat places Oakland at 5-18-4 for the season.

Although the loss is another blemish on Oakland’s record, some good did come out of the night.

In recognition of World Cancer Day, Oakland hockey coordinated with Gilda’s Club Metro Detroit, a national cancer awareness and support group, in order to raise funds for families affected by the disease.

Every time a goal was scored by Oakland, audience members had the opportunity to contribute donations to jars that were circulating through the stands. By the end of the night, Gilda’s Club had gathered hundreds of dollars.

Regardless of the gesture, Oakland’s supporters received only two chances to make a payment.

The first period saw Oakland come out strong and organized. After winning the faceoff, the Golden Grizzlies landed their first goal just 34 seconds into the game.

In his debut game, Oakland goalie Nicholas Borg defended the net until a surge of Eastern players overwhelmed him and scored a goal. With its resurgence underway, Eastern would continue to score one more goal before the conclusion of the first period.

Oakland hit the ice hard during the second period in hopes of closing the 2-1 deficit.

The Golden Grizzlies shoveled the puck back and forth in an effort to generate more scoring opportunities. Amid a flurry of shots, Oakland still couldn’t land the goal it needed, ultimately finishing the second period as it began.

The third period saw Oakland’s revitalization develop further as the Golden Grizzlies managed to tie the game 2-2. The glimmer of hope was dashed as a concentrated attack in front of Oakland’s net saw the puck narrowly skim by Borg.

Facing the prospect of possible overtime, Oakland attempted to answer, but the match was finalized after a full-rink shot from Eastern struck the back of Oakland’s open net, concluding the game 4-2.

“We were there in stretches, but being there for the full 60 [minutes] is a tough one,” said head coach Colin Ronayne. “We need to go back to the drawing board, have a good week of practice and hopefully take care of business.”

“We played hard all night, but we just couldn’t find our bounces,” Saputo said. “You put up 50 shots on someone, and you’d expect to win a hockey game.”

“I thought we started off really strong, but we tend to play down to lower teams,” Rotondi said. “We just have to come back next weekend and show what we got.”

Oakland’s next matchup will be against rival Rochester College. Facing off in the Jug of Rochester Hills Series, the teams will battle at both 7:30 p.m., Friday, Feb. 10 at the Onyx Ice Arena and at 1:30 p.m. Saturday, Feb. 11 at Suburban Ice Macomb.