A night in the life of AD Konya 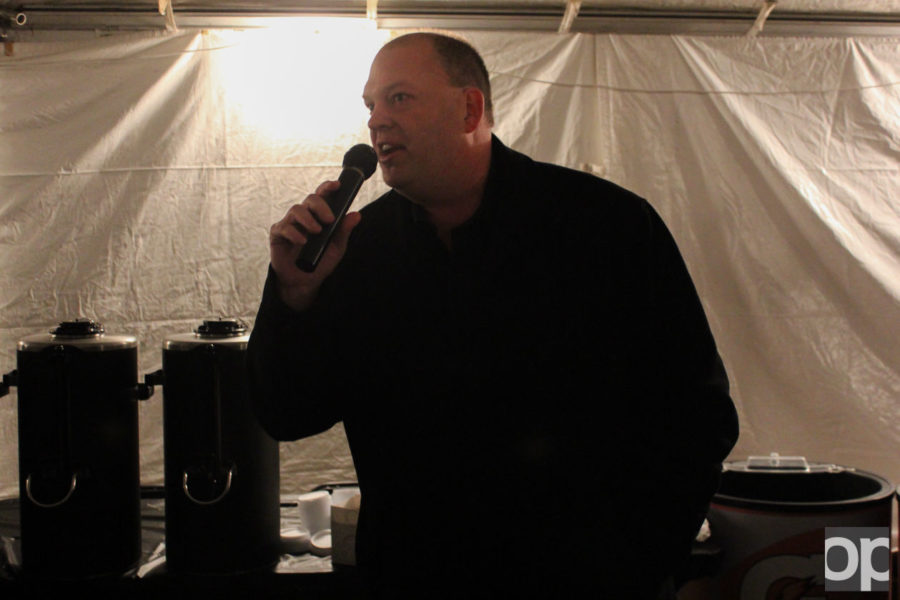 Athletic Director, Jeff Konya speaks to students inside the tent which held Winter Fest Activities and performances on Friday, Jan. 29.

Friday, January 29. Oakland’s first Winter Fest BYOB tailgate. In a parking lot outside the O’rena, a huge, heated white tent pulsed with music, laughs and Grizzly pride before the men’s basketball team took on Wright State, which was then tied for first place in the Horizon League. Director of Athletics Jeff Konya worked behind the scenes all evening to make sure the Winter Fest ran smoothly and perhaps paved the way for future tailgates. The following was Konya’s agenda leading up to the game.

Konya arrives at the tailgate after a compliance meeting. He greets students and student athletes alike, takes pictures with student organizations, and talks with alumni. The atmosphere: music bumping, people eating, drinking and dancing, readying themselves for game-time cheering. Konya is pleased with the outcome and says the tailgate has a lot of potential.

He irons out details of the speech he is about to give to pump up the crowd.

He gives his speech and thanks the Board of Trustees, Student Congress and other bodies for making Winter Fest possible. He stresses the fans’ importance for that night’s game. It’s a huge game, he says. They will need the fans behind the team all the way.

Konya talks to alumni and long-time ticket holders about how they need more events like Winter Fest. They touch on some improvements for next year including a photo booth (so students can tweet their pictures and have them up on the big screen during the game), better (and more) catering and more attendance by coaches and alumni. Konya mentions the need to get the residence halls involved, as well.

The Pontiac High School drumline leads the Grizz Gang, alumni, families and Konya into the O’rena.

Konya visits multiple VIP venues — The Courtside Club, Elliott Room, and The Den — to check in with old friends, alumni, ticketholders and his mom and nephew to receive their thoughts on the first tailgate and how Oakland could improve next year’s Winter Fest. He also wants to make sure everyone is enjoying their evening.

He makes “his rounds” to ensure all spectators are content and that there are no major issues. He buys a pair of mittens to throw at halftime during the annual Mitten Toss. He goes to the athletic offices to check in with his staff.

Konya takes his seat behind the Oakland basket, in front of the Grizz Gang.