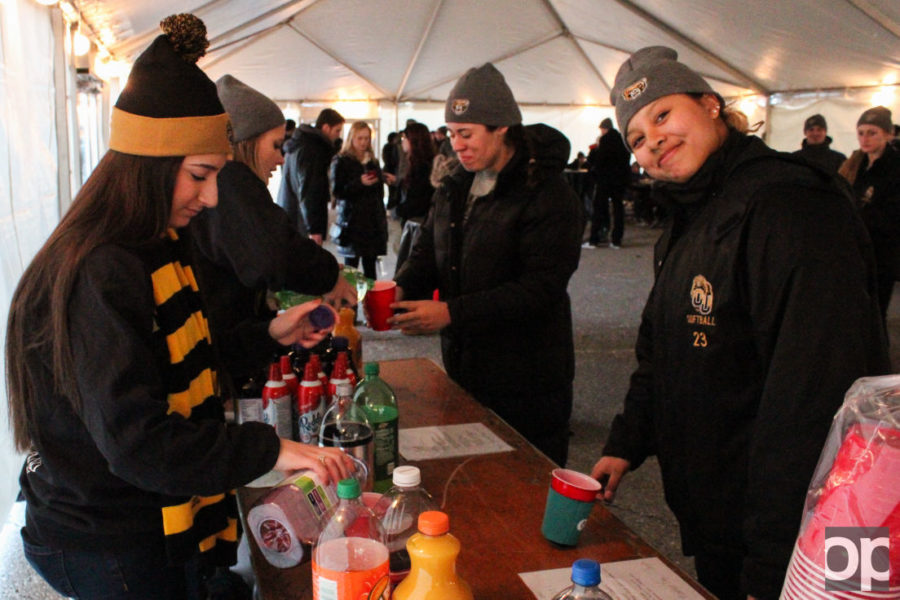 Oakland University Student Congress hosted the Winter Fest Tailgate on Jan.29 before the men's basketball game inside a heated tent, getting students prepared for game night.

The Winter Fest Tailgate Friday, Jan. 29, was yet another successful Oakland event this year.

Beginning at 4:30 p.m., the tent in the P16 parking lot was packed with students looking to have some fun before the men’s basketball game.

OU Student Congress (OUSC) holds a tailgate each semester. However, this was the first time they partnered with Athletics to put on the event.

Vicki Harris, a sophomore double majoring in accounting and finance, was the Tailgate Committee chair.

She began planning the event right after the fall tailgate, ensuring that everything was thought of before the big day.

Harris stated that both Athletics and OUSC were confident it would be one of the best winter tailgates Oakland had seen.

She estimated around 600 people came out throughout the whole event, showing that both organizations’ hard work paid off.

There was free food and a mock drink station, mixing up delicious non-alcoholic beverages.

Likewise, the hot chocolate bar was a hit. With toppings like whipped cream, chocolate sauce and sprinkles, people were reminded they’ll never outgrow this treat.

While there wasn’t an actual water pong tournament, pairs still flocked the table to show off their skills.

There were also a variety of performances, including the Gold Vibrations. Oakland’s award-winning coed a cappella group showed their passion for music in renditions of songs like Bastille’s “Pompeii” and Ed Sheeran’s “I See Fire.”

Austin Arquette, who works closely with DJ Bwalk, amped up the crowd. The Pontiac High drum line and members of the dance team also livened up the place.

Head coach Greg Kampe of the men’s basketball team was also seen enjoying the fun before leaving for the game.

Housing students had the chance to win free prizes by checking in at the Oakland Athletics Marketing Table and attending the basketball game afterwards, where winners were announced.

Harris was satisfied with how it turned out.

“The event went really well. I was very pleased to see how many students and alumni came together to support OUSC and the basketball team,” she said.

Taylor Blakely, coordinator of Marketing and Promotions with Athletics, was also instrumental in organizing the event. He feels this is just the beginning.

“We’re hoping to make it a tradition and grow it each year by involving even more campus departments,” he said.

Around 7:30 p.m., people started heading to the O’rena, where the Golden Grizzlies took on the Wright State Raiders.

OU pride traveled to the court, where students, staff and alumni alike cheered their team to victory.

Dema Iskander, a senior in communications on the Tailgate Committee, knows how important these kinds of events are for OU.

“Bringing everyone together for one focus, having that Golden Grizzly pride, is what builds up our school and students: past, current and future,” she said.