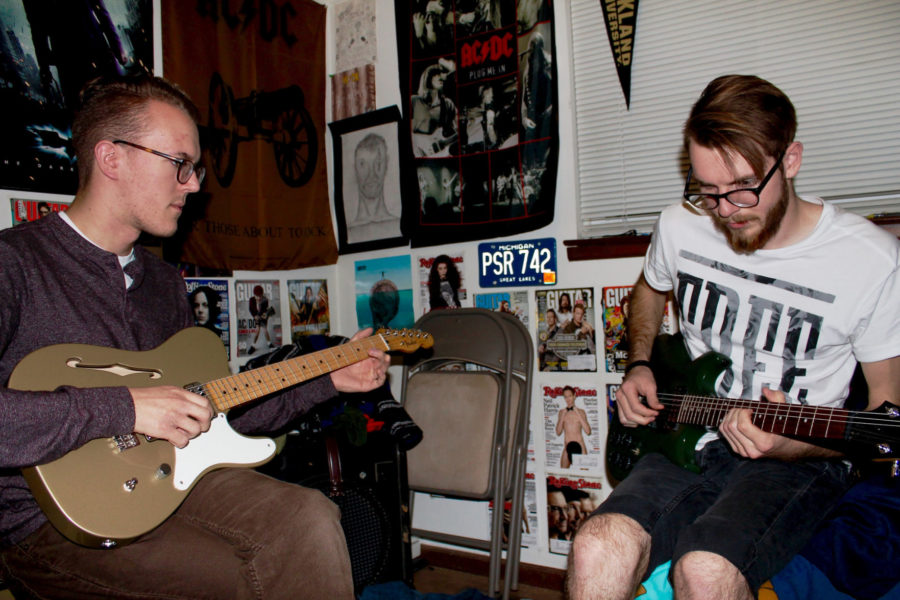 Carved Out sets up at the Pike Room in the Crofoot on Jan. 9.  During soundcheck, lead vocalist and guitarist, Aaron Rush requests for his guitar to be ‘thunderous.’

The crowd has already been treated to two bands prior to Carved Out’s set and will experience one more before headliners, A Year in New York, take the stage.

A couple die-hard Carved Out fans stand eagerly at the edge of the stage and talk with the band while they continue their set up.

Rush finally approaches the microphone and thanks the audience while encouraging them to leave all the ‘shit’ outside (work, school, etc.).

If I had one word to describe Carved Out, it would have to be, kinetic.  Chris Stark, bassist, and Teller immediately jump towards one another playing off of their intense rhythms as the set begins.  A fair amount of head banging, running and jumping is included in the show.

Their first song sets them in motion and they powered through despite Rush losing a guitar string.  Relating to their theme of movement, Teller encouraged the audience to go with the flow as Rush replaced his broken string between songs.

Throughout the set, they performed their recent single release, “Reflect & Respond” and gave audiences a peek at their upcoming EP with the song “Wraparound Porch.”

The self-proclaimed melodic-hardcore band infused spoken word, screaming vocals and soft spoken singing to create a sound that is uniquely its own while reminiscing on aspects of different genres.

The fourth song in the setlist, “Swim Up The Creek To Drown In The River,” started out with brighter chords on the guitars while Rush juxtaposed darker overtones in his screaming vocals.  The second verse was mildly nostalgic of earlier pop punk bands but quickly switched into extended reverberating chords to intensify the dark mood.  A high pitched note plucked on Teller’s guitar signifies the end of the song.

During just a 30-minute set, an audience member jumped on stage, Teller left the stage to run around the crowd and the bassist attempted a half backbend.

“The energy in the room was inspiring,” Teller said.  “We feed off of that whenever we play.  We want people to know that our music is for everyone to have an opportunity to let go…”

Sitting down with Teller after the show, he explained that their EP will be a sort of concept album in which listeners are taken on a journey.  At the end of the EP, the audience and band will return ‘home’ with the song “Wraparound Porch.”

They are currently tracking with Aaron Bradley and the EP will be mastered by former Defeater band member, Jay Maas.

A word to anyone hoping to attend a Carved Out show, do not insult Star Wars because they will call you out onstage.  Also expect immense energy, passion and a personalized experience as you listen to the band’s diary screamed aloud.

Keep updated on any and all things Carved Out at carvedoutmusic.bandpage.com and on Facebook.