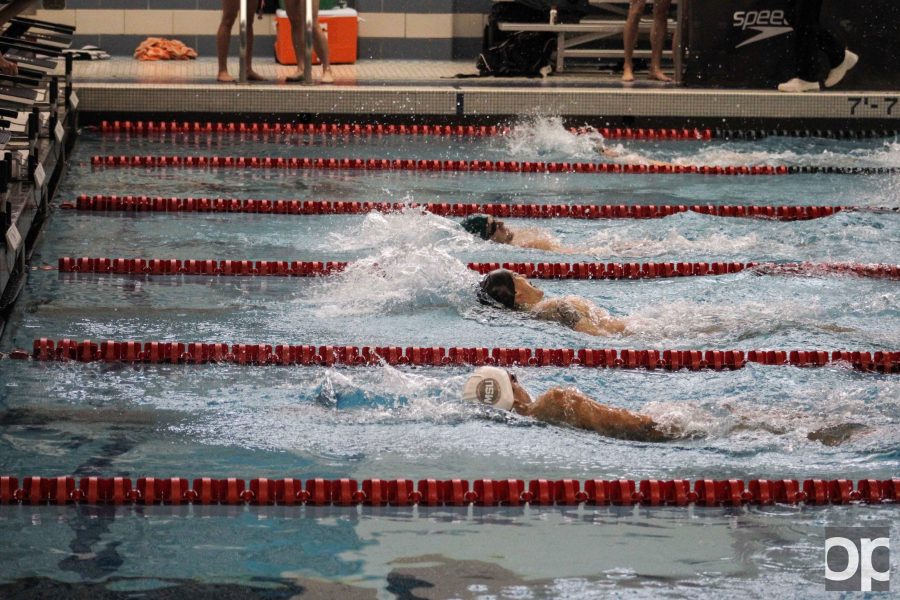 With the loss against Michigan State behind them, the Golden Grizzlies are now preparing for their next meet at 5 p.m. ET on Friday, Jan. 27 at Cleveland State University.

Seas of black and gold and green and white streamed into the Oakland Aquatic Center as the Golden Grizzlies clashed with the Michigan State Spartans during a dual swimming and diving meet on Saturday, Jan 21.

The senior day defeat was the men’s first home dual-meet loss to the Spartans since 2002.

Building on the men’s accomplishments, Joe Smith won the 3-meter boards at 346.80 and Tuomas Kiviluoma took first place in the 100 butterfly in 49.06 seconds.

“We had a lot of good things to take away from today’s meet,” said Pete Hovland, head swim and dive coach. “We don’t want to be content with losing, but our relays were firing on all cylinders, and our seniors really stepped up.”

Hovland focused on the senior’s contributions.

“The fact that we have 16 seniors graduating today — eight women and eight men — really says a lot about the culture of our program,” he said. “I wanted to make sure the freshmen, sophomores and juniors really understood what it means to say goodbye to these individuals.”

Kiviluoma, a senior athlete hailing from Espoo, Finland, reflected on his past four years on the team.

“For me, being an international athlete has been something spectacular,” Kiviluoma said. “In Finland, swimming is a very individualized sport, and here it is all about the team. Having this team atmosphere at Oakland — all this tradition and winning culture we have — has definitely helped me grow as an adult and get along with people better.”

Upon graduating, Kiviluoma anticipates remaining in the U.S. to not only pursue a career, but also to soak up as much culture as possible.

Echoing Kiviluoma’s sentiments, Martin celebrated the comradery she experienced as a student-athlete.

With the loss against Michigan State behind them, the Golden Grizzlies are now preparing for their next meet at 5 p.m. ET on Friday, Jan. 27 at Cleveland State University.